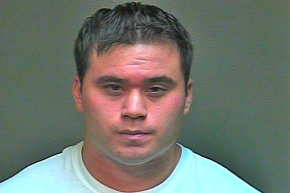 After four days of jury deliberation, Oklahoma City ex-policeman Daniel Holtzclaw, 29, was found guilty yesterday on 18 out of 36 charges filed against him on Dec. 11, 2015. The 18 convictions included four counts of first degree rape, as well as other counts of forcible oral sodomy, sexual battery, and other offenses, in cases involving eight of the 13 victims, all of whom are black.

In video footage from the verdict, Holtzclaw—who turned 29 that day—can be seen sobbing as the jury recommends a total of 263 years in prison. Formal sentencing will be held in January.

The series of sexual assaults occurred over the span of several months in 2014 within an area on the east side of Oklahoma City where Holtzclaw patrolled. In June of 2014, Holtzclaw’s 13th victim reported her assault, spurring an investigation that led to his firing and arrest. Holtzclaw, a former Eastern Michigan football player with three years on the police force, pled not guilty to the charges, which included rape, sexual battery, stalking and other offenses. Both partial and full DNA evidence from two victims were presented last week.

More What If Cops, Not Taxpayers, Paid The Bill For Their Bad Behavior?

Since the monthlong trial began, demographics have played a crucial role. Though the Oklahoma County courthouse has not released the racial data on the jurors, all 12 appeared to be white, and two-thirds of the group was male.This is especially noteworthy in a city where 15 percent of the residents are black. (Holtzclaw’s father is white and his mother is reportedly Japanese.)

Further issues relating to race, class and privilege became apparent as the trial proceeded. Police investigators testified Holtzclaw used his position as a police officer to systematically target women who had outstanding warrants or criminal histories.

“Holtzclaw didn’t choose CEOs or soccer moms … He chose women who he could… intim[id]ate and bully into silence,” the prosecution reportedly stated in its closing arguments.

One of the victims specifically testified that she didn’t report Holtzclaw’s abuse because she had “never been on the right side of the law.” She also testified that immediately prior to her assault he seized her crack pipe and told her, “You know you can go to jail for this.” Another woman told the jury, “I didn’t think anyone would believe me. I’m a black female.” Several of the women Holtzclaw targeted had backgrounds that included drug use and sex work, and at least two of them testified in orange jail uniforms. The first woman to come forward was a 57-year-old grandmother without a criminal record. Further investigation into Holtzclaw’s past turned up most of the other victims.

Jurors listened to days of testimony from the 13 accusers. During examination, Holtzclaw’s defense attorney questioned accusers’ credibility and read out their criminal histories—histories that the prosecution argued played a direct role in how Holtzclaw’s chose his victims.

“I’m really getting upset by the way you’re coming after me,” the youngest accuser responded to a line of questioning. She was 17 years old when Holtzclaw raped her on her mother’s front porch after threatening her with an outstanding warrant for trespassing.

Holtzclaw declined to testify in his defense. In October, his attorney, Scott Adams, told local media that, “The burden [of proof] is on [the victims]. I truly don’t believe they can even come close to the burden.”

The case highlighted the multi-dimensional issue of police violence within the black community, and it calls into question the response (or lack thereof) from mainstream media outlets, the larger Black Lives Matter community and white feminists.

According to activists and others following the case, the personal histories (as well as the race and gender of the victims) has contributed to the media coverage surrounding the case—or the lack thereof. Even Monday, when final arguments from both sides were made, the Washington Post asked why the story “remained so little-known.”

“Imagine what the national response would be if a police officer sexually assaulted 12 white, middle-class women and one underage white girl while on duty. Pause for a moment and honestly, deeply think about that,” Kirsten West Savali wrote for The Root last month. “I guarantee, this week would not have been the first time many people had heard Holtzclaw’s name.

Even after the November 2015 publication of a yearlong investigation from the Associated Press detailing Holtzclaw’s arrest and uncovering 550 officers who had been decertified for sexual assault nationwide as well as another 440 who lost their badges for other sex offenses, the case had not quite gained widespread media attention.

While the verdict may come as a source of vindication for the victims and the activist community that has rallied behind them—which used the hashtags #BlackWomenMatter, #WeWantLife and #NotOurSisters to bring attention to the case on social media—the victory isn’t uncomplicated.

On Tuesday, during the fifteenth hour of jury deliberations, Vocativ spoke with Candace Liger, a co-founder of Oklahoma City Artists for Justice who had been active in livetweeting from the trial courtroom and leading the group of approximately 60 protesters gathered outside City Hall.

Though OKC Artists for Justice has strong backing from male supporters—Liger estimated that approximately 40 percent of the protestors were men—Liger noted past backlash from men.

“We’ve had a lot of resistance from black men… who tell us that there are other things to worry about besides these ‘whores that got raped,'” she said. “It was ridiculous, and we finally just had to start ignoring it altogether.”

#HoltzclawTrial has made me realize I will always be a BLACK woman before I am a woman! #BlackWomenMatter #Eastside13

The Holtzclaw trial and preceding AP investigation shone a light on an underreported problem. While there are few national statistics available on sexual victimization by active policemen (and the role that race and criminal history might play in these crimes), a study from the Cato Institute reports that sex misconduct is the second most common complaint against officers, second only to complaints of excessive force. Additionally, a recent study from The Sex Workers Project revealed that 14 percent of the 51 New York-based sex workers surveyed reported past incidents of police violence.

The mother of #Holtzclaw‘s youngest victim told @AP she hopes the case shows police sexual misconduct isn’t about one officer or department.