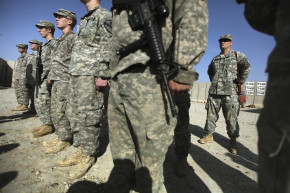 ISIS And Americans Agree On Something: War
By Shane Dixon Kavanaugh

ISIS And Americans Agree On Something: War

A majority of Americans now favor sendings combat troops into Syria and Iraq to fight ISIS. Some warn that's just what the terror group wants

For the first time, a majority of Americans are gunning to send U.S. combat troops into Syria and Iraq to battle the Islamic State. The terror group wants exactly the same thing, according to the president and a number of foreign policy experts.

Fifty-three percent of Americans now support deploying boots on the ground against ISIS, according to a CNN/OCR poll released Sunday night. That’s a 15-point increase since the survey began back in September 2014. The survey, which was completed just one day before an alleged ISIS-inspired rampage killed 14 in San Bernardino last week, reflects growing frustration with the Obama administration’s handling of terrorism. It is also consistent with several other polls that have seen upticks of support for U.S. combat troops since the Paris terror attacks last month, for which ISIS also claimed credit.

Obama continues to defend his administration’s military strategy for defeating ISIS, which includes a mix of airstrikes, munition drops and a limited number of American special forces in Syria and Iraq, in place of conventional ground troops. During his speech from the Oval Office on Sunday night, he said that a prolonged ground war against the terror group would play right into its hands.

“They know they can’t defeat us on the battlefield,” Obama said. “But they also know that if we occupy foreign lands, they can maintain insurgencies for years, killing thousands of our troops, draining our resources, and using our presence to draw new recruits.”

The president is not alone in this assessment. A number of and experts and analysts have repeatedly warned that American boots on the ground would further the jihadist group’s appeal. Rukmini Callimachi, the New York Times correspondent who focuses on ISIS, went on a widely shared tweeting spree during Sunday’s address about how a ground war is exactly what the jihadist group wants.

1/Obama has done his homework when he says ISIS wants us to start a ground war, and will use our occupation of a foreign land to recruit

6/ While it’s hard to get our heads around this, I have spoken to enough ISIS fanboys & members by now to believe that they mean this

Sending a sizable number of U.S. troops into Syria and Iraq may also fulfill ISIS’ own ideological narrative, which believes an epic battle against the west will bring about the end of the world.

“ISIL has a concrete apocalyptic and prophetical vision and they might welcome an American intervention in that sort of manner,” said David Weinberg, a Middle East scholar with the Foundation for Defense of Democracies, a Washington, D.C.-based think tank.

The CNN/OCR poll also found that majorities across party lines believe that the U.S. has been too complacent in its approach to combatting ISIS. Around 52 percent of Democrats and 66 percent of Independents said the U.S. military response to the terror group has not been aggressive enough. That figure among Republicans was 90 percent.

Many of the GOP candidates for president have seized on the public’s growing appetite for a ground invasion in Syria and Iraq and and have infused their own hawkish rhetoric into the race.

“They have declared war on us,” former Florida Governor Jeb Bush recently said of ISIS. “And we need to declare war on them.”

Gov. Chris Christie of New Jersey was even more grandiose during a campaign stop in Iowa on Friday. “Our nation is under siege,” he said. “What I believe we’re facing is the next world war. This is what we’re in right now, already.”