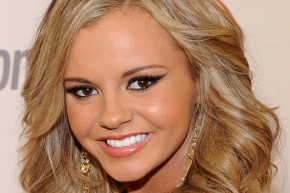 Olson’s disclosure comes on the heels of multiple members of the adult industry speaking out against Deen. The slew of accusations were sparked by a rape allegation made by Deen’s ex-girlfriend Stoya. The claims range from sexual assault to violence on-set to, as Vocativ previously reported, excessive roughness and boundary violations during performances.

“While we’re doing the scene, he again was choking me way, way harder than he had to,” she continued. “He was slapping me way harder than he had to. I was crying in the scene.” Later, she added, “My tears were very real in that scene, because he hurt me so bad.” Indeed, Olson can be seen in the film, which Vocativ watched after the broadcast, appearing to cry, her eye makeup smeared. She alleges that Deen’s overly rough treatment of her appeared to cause his sexual excitement: “Not only that, but off-camera he was pinching so hard … like, just to cause me pain, there was nothing sexual about this … he was pinching my … the side facing away from the camera. He was pinching all over my thighs and my stomach and my arms just as hard as he could to cause me tears, because it, like, made him hard. It made him turned on to cause me pain.” The video of Olson talking about the scene has since been removed from Periscope.

Later in her live broadcast, Olson, who has previously said that she “didn’t have any bad experiences” in porn, watched the video in question. The visuals from the scene are not shown, although at points the audio can be heard. Once the sex scene between Olson and Deen begins, she started to exclaim, “Oh my God! I fucking hated this! I have tears in my eyes, this is so fucking upsetting.” At one point, while watching the video, she said, “Oh my God, how did I, like, live after this scene?” At a couple points in the broadcast, she said she was watching moments where he is pinching her in a way that could not be seen on camera. “Here’s where he’s pinching me,” she said. “He’s pinching me again, motherfucker.”

Shortly thereafter, she said, “I hope you get ten years, you fucking asshole.”