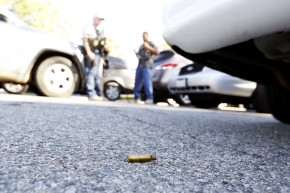 San Bernardino And The Shock Of Female Mass Murderers

Fourteen people killed. Seventeen wounded. Two suspects dead, another detained. Perhaps the trauma of yet another mass shooting—the 355th so far in a year that hasn’t even surpassed 336 days, the second shooting on Wednesday alone—made it easy to lose sight of an interesting detail from the identity of the suspects: One was a woman.

The dead suspects have been identified as 28-year-old Syed Rizwan Farook and his alleged wife, Tashfeen Malik, 27. Together, the assailants entered a San Bernardino conference center dressed in black face masks and tactical gear, opened fire, and then escaped by SUV, where they would lead police on a high speed chase to nearby Redlands and their deaths—one in a pool of blood on the street, another still in the vehicle.

But when actress Rose McGowan tweeted that she was “sick of men with guns killing us,” she quickly got an earful of correction back, including admonitions to “stop being so sexist” and accusations of misandry for not knowing any better:

.@rosemcgowan Doesnt know that one of the suspects in tonight’s shooting was a woman. #MISANDRIST pic.twitter.com/eHnRyXtvva

@rosemcgowan One of the killers was a woman. Stop being so sexist.

But it’s hardly sexist for McGowan or anyone to assume the shooters would be men. As we know from simply being alive, looking around, men unequivocally have the monopoly on crime—they are 90 percent of offenders overall in the United States. But mass shootings? Surely some women have wanted in on the grisly action. But nope: Just two women have been involved in such incidents in the U.S., according to a database hosted by Mother Jones going back to 1980. In 2006, ex-postal worker Jennifer San Marco, who had a history of mental illness, killed six other postal workers in Grants, New Mexico, then committed suicide. In early 2014, under threat of eviction, 44-year-old Sherrie Rhoades opened fire on a Native American tribal meeting, killing four people, and stopping when she ran out of bullets to grab a knife and keep going.


One caveat: Mother Jones’ criteria for mass shootings are debated—in part that they require a lone shooter (except in some school shooting cases) to have killed at least four people, an FBI standard, according to criminologist James Alan Fox, omitting those crimes related to robbery or gang activity, instead focusing on targets in a single location. (For this reason, the DC Beltway snipers were classified as serial killers.) Such parameters could skew the results slightly in terms of gender—for instance, we might wish to then include female shooter, Amanda Miller, who killed two police officers in Las Vegas in 2014 with her husband Jerad, before killing him, and then herself. And were we to stretch back one year to 1979 before the Mother Jones’ database starts tracking, we’d include Brenda Spencer, a 16-year-old who killed a principle, janitor, and injured eight children at the Cleveland Elementary School in San Diego all because she “didn’t like Mondays.” As other tweeters pointed out, the San Bernardino shooter being female hardly moves the needle in terms of our reflexive assumption—typically a correct one—that mass shooters are men, and typically white, to the tune of 66 percent.

The fact that there was a woman shooter today does not make the reality that men commit more mass shootings any less real or important — meh (@meh_kenna) December 3, 2015

Though instances of female crime are on the rise over the last three decades—the number of female prisoners in the United States alone has risen 646 percent between 1980 and 2010—it’s still just harder for people to think of women, typically raised to be nurturing, passive, and more emotionally manipulative, to use physical violence, or in particular, sexual violence. While the number of female sex predators is considered to be quite low compared to men, there are a number of reasons they escape notice when they do offend, a kind of cauldron of gender stereotypes, not just that women aren’t capable of such crimes, but also stereotypes that would shame men into never speaking up, thus leading to lower prosecution rates. Same goes with domestic violence, which though also thought to be lower in incidence, benefits from a culture of surprise at female offenders, and a culture of shame among male victims.

Mass shooters are always typically men for a variety of reasons, experts say. Jeffrey Kluger, in Time, cites anything from testosterone, to higher levels of aggression, to repressed feelings, to more access to guns, violent video games, a culture of aggression, status, a socialized tendency to externalize blame for their problems.

“This is also the reason that when women do kill—and they do—it’s typically in a more intimate way, such as by drowning or suffocating,” Kluger writes. “Men tend to go wild, spraying a room with gunfire and the world be damned. That, of course, also increases the male killer’s body count.”

Television shows like Deadly Women or Snapped recount such intimate female crimes, largely hinging on the novelty—how could a nurse poison the very patients she was hired to care for? How could a woman—a potential mother, after all—abuse a child? The cases and the shows that reenact them are popular for gruesome entertainment, but also because they also offer a subtext that typically reinforces the stereotype in the first place. Female sex offenders aren’t really doing it for sex—it’s about loneliness or being accomplice to a male perpetrator. It’s not about violence when women murder men; it’s a relationship gone bad.

Oddly, such assumptions put women in a double bind when it comes to asserting their equality by way of their humanity. Part of women being taken seriously is being viewed as fully human—this means the sugar and the spice, but also the snakes and snails. Such intellectual contortions have been necessary in convincing a skeptical public that women were capable of fighting in combat, for instance, or running into burning buildings. In the same way perceptions of men have had to soften to understand their role as caregivers, women, unfortunately, it goes the other way for women: They need to be thought of as capable of a cold, inhumane violence.

In the coming days, experts are likely to be called to speculate and analyze why any woman would join these two men in murdering 14 people. Most likely it will be as much about her relationship to the men as anything—historically, women are viewed not as instigators but rather accomplices to crimes whose executions are organized and led by men, their economic independence, mental health, abusive past, or love for a man viewed as reason enough to engage in violent killing they’d never devise on their own.

But while this makes sense on some level, it can have the strange effect of robbing women of the agency to have chosen a criminal role on their own. It’s certainly no one’s utopian vision of equality—no one is saying it matters one whit to society, women, or certainly the people in that conference center who died what the gender of the shooters was. But if anything, it’s a disturbing reminder that the mixture of any number of factors plus easy access to guns has become a crime absolutely anyone—even women—are capable of.