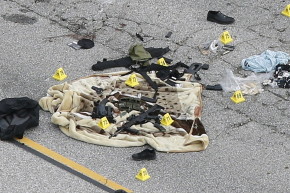 At least 14 people were killed on Wednesday in a mass shooting in San Bernardino, California

The woman who carried out the unimaginable massacre in San Bernardino pledged allegiance to ISIS on Facebook during the rampage, law enforcement officials revealed Friday just hours before authorities declared the attack an “act of terrorism.” Tashfeen Malik was killed along with her husband in a shootout with police hours after the attack that killed 14 and wounded 21.

Malik, the wife of fellow shooter Syed Rizwan Farook, made the pledge to ISIS leader Abu Bakr al-Baghdadi via a Facebook post, federal law enforcement officials told the New York Times. The post was reportedly made on an account not associated with Malik’s name.

“We are now investigating these horrific acts as an act of terrorism,” David Bowdich, the FBI assistant director in charge of the Bureau’s Los Angeles office, said Friday afternoon during a press conference updating the status of the investigation.

The Islamic State has not taken credit for the attacks, and so far, there’s no known evidence that the terror group directed the shooters to act. FBI Director James Comey said at a news conference Friday that “The investigation so far has developed indications of radicalization by the killers, and of potential inspiration by foreign terrorist organizations,” but added that “so far we have no indication that these killers are part of an organized larger group, or form part of a cell. There’s no indication that they are part of a network.”

Still, ISIS adherents began celebrating the massacre online before the manhunt for the suspects had even ended. Vocativ revealed the ghoulish celebration Wednesday, uncovering the hashtag #America_Burning on terrorism forums using our deep web technology.

An ISIS affiliated media group published an unofficial claim of responsibility on Friday. “Two supporters of the Islamic State killed and injured tens of Americans in an attack in San Bernardino in the state of California,” says the statement, which was distributed Friday by the Amaq News Agency, and which was discovered by Vocativ analysts on ISIS-related discussion forums.

“This attack happened only a few days after American officials said that the Unites States is far away from ‘terror attacks,’” the statement continues.

Malik, 27, and Farook, 28, were named by authorities late Wednesday night. Malik was a citizen of Pakistan, in the U.S. on a visa for foreign-born fiances. Her husband, Farook, was an American citizen. The investigation into possible terrorism links escalated when authorities found a massive stockpile of ammunition and pipe bombs at a home in Redlands, California rented under their names.

The shooters burst into a holiday party late Wednesday morning at the Inland Regional Center, a facility for the disabled. Dressed in tactical gear, they fired indiscriminately into the crowd, with the apparent aim of maximizing carnage rather than taking out a specific target, according to police. Police also found a bundle of three remote-controlled pipe bombs at the site that failed to detonate. Police Chief Jarrod Burguan said the sophistication of the attack suggested it had been planned in advance. “I don’t think they grabbed the guns and tactical gear on a spur-of-the-moment thing,” he said.

An attorney for the shooter’s family said Friday that everyone was “totally shocked” by the news of the massacre, and that the shooter Syed was a loner who showed no signs of radicalism. “He was a very isolated individual,” attorney David Chelsey said, with few or no friends. He also urged the public not to jump to conclusions about Farook and his wife as the investigation is ongoing.

Farook was a county employee who worked as an environmental specialist for five years, police said. Co-workers said Farook went to Saudi Arabia this year and returned to the U.S. with his wife. Farook’s brother told the LA Times that Farook and Malik were married two years ago.

It appears that Farook maintained profiles on dating websites where he said he enjoyed working on vintage cars, reading religious books and hanging out in the backyard practicing shooting targets. In a profile page on imilap.com, a man who identifies himself as “farooksyed49” describes himself as a Chicago-born, Muslim male living in Riverside, California. He states his age as 22, indicating that the shooting suspect, Farook, created the profile six years ago.

More Presidential Candidates Don’t Have Much Time For San Bernardino

Farook was at a holiday party on Wednesday and left angry “or something of that nature,” Burguan said. An attack at the holiday party took place shortly after that, killing at least 14 people in what was the deadliest mass shooting to the hit the U.S. since a massacre three years ago at Sandy Hook Elementary School in Newtown, Connecticut.

Farook’s brother-in-law, Farhan Khan, said on Wednesday that he was in shock. “I have no idea why he would do… something like this,” Khan said at a press conference that was given by the Council on American-Islamic Relations. In an interview with the Daily News, Farook’s father described his son as “very religious,” and said, “he would go to work, come back, go to pray, come back. He’s Muslim.”