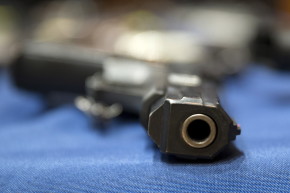 The Staggering Numbers Behind America’s Mass Shootings
By Vocativ Staff

Authorities say at least 14 people were killed and another 17 were injured in a mass shooting in California on Wednesday.

Wednesday’s shooting and the shooting at a Planned Parenthood in Colorado on Friday brings the mass murder death toll in the U.S. to 601 people over thirty years.

Using data compiled by Mother Jones and Vocativ’s own reporting, we’ve added the latest fatalities to highlight the staggering numbers behind mass shootings in the U.S.

The Planned Parenthood and San Bernardino incidents bring the number of those killed in mass shootings to 43 just this year. The San Bernardino shooting is the deadliest in 2015, surpassing the death toll from the massacre on June 17 in which Dylann Roof opened fire at a church in Charleston, South Carolina, killing nine and injuring one other.

There have been 74 mass shootings in the last 35 years if we include the San Bernardino and Planned Parenthood shootings. The worst year for mass shootings on record according to Mother Jones’ data is 2012, during which the deadliest was the Newtown, Connecticut school shooting on December 14. In that incident, Adam Lanza, 20, shot his mother dead at their home, then drove to Sandy Hook Elementary school. There, he killed 20 children and six adults before committing suicide.

The identity of the gunman, or gunmen, from Wednesday’s tragedy in San Bernardino has not been identified yet, but white men are overwhelmingly responsible for mass shootings. Since 1982, 46 white men were involved in a total of 44 massacres, more than four times the tally of African Americans, who account for just 11.

In 35 years there have been just two occasions in which women were responsible for mass killings. On February 20, 2014, Cherie Lash Rhoades, 44, opened fire at the Cedarville Rancheria Tribal Office and Community Center in Alturas, California, killing four and wounding two. After running out of ammunition, Rhoades grabbed a butcher knife and stabbed another person to death. In Goleta, California, on January 30, 2006, former postal worker Jennifer Sanmarco, 44, shot dead a former neighbor, then drove to the mail processing plant where she used to work. Inside, she opened fire, killing six employees before committing suicide.

With 33 deaths, the Virginia Tech, Blacksburg, Virginia massacre on April 16, 2007 holds the record for the highest body count. Student Seung-Hui Cho, 23, opened fire on his school’s campus, killing 32 people and injuring 23 others before committing suicide.