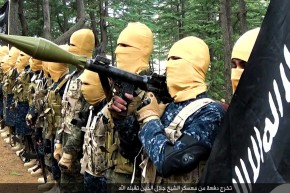 The app surfaced on Sunday, serving as yet another outlet for the terror group to disseminate propaganda

An ISIS-linked media group launched an Android app that allows the terror group’s supporters to follow a jihadist “news” feed.

The app, discovered by Vocativ using our deep web technology, was created by the Amaq News Agency, a media unit affiliated with ISIS. It allows users to access the agency’s reports on Android devices, including updates from ISIS battles on the ground, exclusive videos from areas under Islamic State control and infographics that detail ISIS operations in Iraq and Syria.

Vocativ tried the app, which isn’t available on the Google Play Store but instead is distributed by APK files that can be installed on Android-powered devices manually. It is easy to use, and appears to be easily accessible: On Twitter, at least 40 posts by ISIS loyalists have included links to download the app, indicating that it’s circulating widely in online ISIS networks.

The app surfaced on Sunday, serving as yet another outlet for the terror group to distribute propaganda and communicate. The group already uses social media platforms including Twitter and Telegram, but faced pushback in recent weeks. Anonymous hacktivists claimed they shut down more than 11,000 ISIS-affiliated accounts. Telegram also said this month it closed 78 accounts linked to ISIS.

While Amaq, the “news agency” boasting the app, isn’t considered an official ISIS media wing, Vocativ found that it has released exclusive videos showing Palmyra in Syria and Ramadi in Iraq after the cities were seized by ISIS. The agency covers only ISIS-related events and also maintains a channel on Telegram.

A screen shot showing a video feed on the new Amaq app.