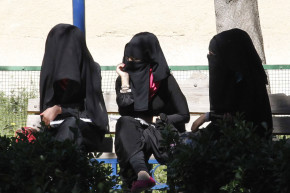 Life Under ISIS: ‘Today, I Was Punished For Revealing My Eyes’
By Gilad Shiloach

Life Under ISIS: ‘Today, I Was Punished For Revealing My Eyes’

A string of posts on a main ISIS forum offer a rare, exclusive glimpse at frustration simmering in territory controlled by the Islamic State over a stringent dress code. A forum user called Al-Muwahida, who appears to be a woman living under the terror group’s rule, posted a detailed account of her alleged encounter with Islamic State police who scolded her for exposing her eyes in public.

Her story starts in an initial post on an ISIS forum on Thursday, Vocativ discovered. “Today, I was punished for the first time for revealing my eyes,” she wrote. “I was with a (female) friend of mine at the university, and one of the Islamic Policemen, about 20 years old, told us to cover our eyes and put on an eye veil.”

But, not wearing the kind of veil she needed to cover her eyes, she wasn’t able to do so, according to her account. “We continued on our way and another man from the Islamic Police, about 30 years old, didn’t say anything about the eye veil,” Al-Muwahida said. “I noticed the differences: One said to cover the eyes and the other one didn’t say anything.”

That was the crux of the problem for Al-Muwahida, who mostly took issue with the inconsistency. She also criticized the directive as being too harsh. She wasn’t wearing makeup—an offense in the eyes of the Islamic State—and, according to her account, her veil wasn’t revealing enough to even show her skin color.

She’s not alone in her frustration. Al-Muwahida said she’s seen scuffles erupt over the policies of the Islamic Police—responsible for enforcing ISIS’ strict interpretation of sharia law. Women have raised their voices at policemen, who in turn have responded with either patience or outrage.

Women aren’t the only ones scrutinized under the Islamic State: Police also arrest men for wearing “tight clothing,” Al-Muwahida said.

Her story ignited a five-page firestorm of discussion on the ISIS forum, with many commentators backing the policeman who told Al-Muwahida to cover her eyes. “Everything that is related to women mush be dealt with harshly,” a user wrote. Others said they were jealous of Al-Muwahida, who’s “lucky to live under the rule of the caliphate and the rule of Allah.” “We live with the infidels and suffer from naked women,” said another, indicating he was posting from outside ISIS territory. “We are happy when we see a sister covered with her Islamic hijab.”

Al-Muwahida didn’t say where she lived. But she is an active user on the forum, which serves as a popular tool for communication among Islamic State loyalists.

Earlier this year, Vocativ found that the Islamic State launched a dress-code campaign in the Iraqi city of Mosul, which the terror group seized in the summer of 2014. The campaign focused on a style of the burqa—also mandated by the Taliban—which covers the entire body and face with a mesh screen covering for the eyes. The terror group has also imposed strict dress codes for women in other areas under its rule such as the capital of its so-called caliphate Raqqa.