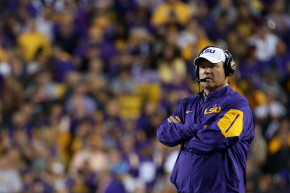 LSU Fans Don’t Want Les Miles, But Everyone Else Does
By Jeff Andrews

LSU Fans Don’t Want Les Miles, But Everyone Else Does

Nothing fires up the rumor mill like a losing streak at Louisiana State, and noted grass gourmand Les Miles has led his football team to three consecutive defeats. As Miles’s fate as head coach is called into question, other fan bases outside of Louisiana are begging for him to grace their stadiums with his presence.

Reports have surfaced that boosters are willing to pony up the $15 million necessary to buy out Miles’ contract and the school has stated that no decision about “The Hat’s” future will come before LSU’s game against Texas A&M on Saturday, a statement which that there is a discussion forthcoming. And it probably isn’t going to be a nice one. Despite Miles having the highest winning percentage in LSU’s history, chattering classes are taking his exit as a foregone conclusion, and the discussion has shifted to where Miles will land when the dust settles, and who might replace him at LSU.

For the sake of discussion, let’s assume Miles is getting canned. But don’t expect to see him in the unemployment line; after an unprecedented number of coaches were fired midseason this year, there’s no shortage of quality schools looking for a new head coach.

So would Miles find fans at other schools just as hostile as LSU has been? A Vocativ analysis of social media surrounding the coach found that for schools in the market for a new coach, Miles, his national championship ring, and two SEC titles would be welcomed by fans with open arms. Supporters of virtually every school with a coaching vacancy are taking to Twitter to beg Miles to come to join their team, and many are expressing complete bewilderment that LSU is so eager to part ways.

Send Les Miles down to Coral Gables. So we can get the ball rolling down at the U — Britton Araujo (@BrittonAraujo) November 25, 2015