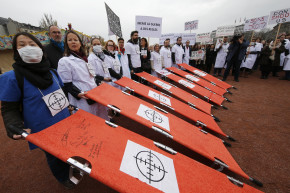 The deadly airstrike on an MSF hospital in Afghanistan was a "tragic mistake" that was completely avoidable, U.S. military officials concede

An internal military investigation into the American airstrike on a Medecins Sans Frontieres medical facility in northern Afghanistan has found an egregious series of human and technical failures behind the deadly attack, senior U.S. officials said on Wednesday.

The hundreds of shells that pounded the charity hospital in the city of Kunduz last month, killing 30 patients and staff and wounding dozens more, was a “tragic mistake” and a “direct result of human error compounded by systems and procedural failures” said Gen. John Campbell, the top American commander in the country, during a press conference.

More The U.S. Changed Its Story On Afghan Hospital Bombing 4 Times In 4 Days

Speaking to reporters, Brig. Gen. Wilson Schoffner, a military spokesman, also said that the aircraft that fired on the hospital had broken the rules of engagement to do so. “We made a terrible mistake that resulted in unnecessary deaths,” he said.

The military officials said that several service members involved in the bombing had been suspended, but would not say whether they would face disciplinary or criminal charges. While the internal investigation report was not made public, the officials outlined a troubling sequence of events that led to the bombing, which they said should have been avoidable.

Here’s how that didn’t happen.

The AC-130 gunship responsible for the attack had been engaged in a separate combat sortie when it was called to carry out an airstrike on a building believed to be occupied by the Taliban in Kunduz. Diverted from its prior mission, the gunship “launched without conducting a normal mission brief or securing crucial mission materials, including no-strike information, that would have determined the coordinates of the hospital,” Campbell said.

En route to its Taliban target, the AC-130 experienced what Campbell described as a “system malfunction,” which rendered the aircraft unable to transmit video or send and receive electronic messages. The crew therefore relied on visual descriptions provided by U.S. special operations troops serving with the Afghan forces.

The crew at one point believed that the aircraft had been targeted by a missile and pulled eight miles away from its course. The move further “degraded the accuracy of certain targeting systems,” Campbell said.

The coordinates initially given to the AC-130 crew led the aircraft to an open field between the intended Taliban target and the Doctors Without Borders hospital. Based on the physical description alone, the crew then zeroed in on the hospital.

Despite there being no signs of hostile activity in the area, the plane fired 211 shells at the hospital over the course of 25 minutes, according the report. The crew never reassessed whether it was targeting the proper building, Campbell said, even after it received a revised position of the intended target. “The crew remained fixated on the physical description,” he said.