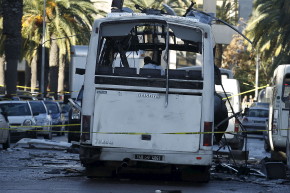 The Islamic State has claimed responsibility for an attack on a bus carrying presidential guards in Tunis, the capital of Tunisia, killing at least 12 people.

In a statement distributed Wednesday by an official ISIS media wing, the terror group said the attacker on Tuesday detonated a suicide vest when he arrived at his target. “The tyrants of Tunisia should know that they won’t be safe anywhere,” ISIS said. “We won’t stop until the law of Allah dictates the law in Tunis.”

The group also released an image of the bomber and said his name was Abu Abdullah Al-Tunisi.

The lethal assault followed another attack in June, when gunmen opened fire on a beach in the resort city of Sousse, killing 38 tourists. In March, attackers opened fire at the Bardo Museum in the Tunisian capital, killing 17 people. It also followed a string of ISIS worldwide attacks as the group expands a global campaign of terror.

After Tuesday’s attack, Tunisian President Beji Caid Essebsi declared a state of emergency across Tunisia and imposed a curfew in its capital. “They want to make us live with horror but we are going to bring that horror to the terrorist camps,” Essebsi said in speech on Tuesday, according to Reuters. “We are at war and we are going to win.”