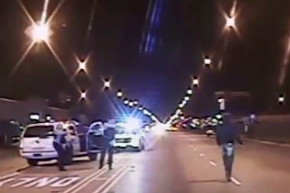 By The Numbers: The Fatal Shooting Of Laquan McDonald
By Vocativ Staff

By The Numbers: The Fatal Shooting Of Laquan McDonald

Officer Jason Van Dyke was charged with first-degree murder Tuesday, for the 2014 shooting of a Chicago teen

State’s Attorney Anita Alvarez called the footage “chilling” at a press conference Tuesday. “I have no doubt this video will tear at the heart of all Chicagoans,” she said. The officer, Jason Van Dyke, faces life in prison if convicted.

Police were called to the scene the night of October 20, 2014 after McDonald was seen carrying a knife. The teen reportedly ignored officers’ calls to drop the knife and kept walking. Several officers arrived on the scene, including Van Dyke, who shot McDonald 16 times.

Here’s a breakdown of some of the key numbers you need to understand the case.

Number of shots fired by other officers at the scene.

Number of seconds that Van Dyke had been on the scene before opening fire, according to prosecutors.

Seconds of the shooting during which McDonald was already on the ground, out of a total of 14 or 15, prosecutors have said.

Days that elapsed after the shooting before murder charges against Van Dyke were announced.

Amount of money the city of Chicago agreed to pay McDonald’s family even before any lawsuit was formally filed.