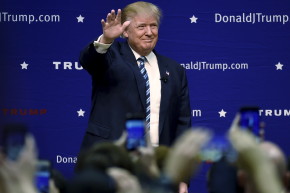 An Offensive Offense: The Enduring Success of Donald Trump
By Jacob Steinblatt

An Offensive Offense: The Enduring Success of Donald Trump

The candidate's unsavory comments about Muslims and black people didn't hurt his popularity one bit.

The Donald Trump controversy machine was in rare form this weekend. The presidential candidate doubled down on statements that Muslim Americans “cheered” when the Twin Towers fell on September 11, even though that’s been widely debunked, and he stuck by his plan to shut down certain mosques and create a database to track Muslim people in the U.S. Lest he only offend one group, he also tweeted out a totally made-up statistic about murders by black people, and said that the Black Lives Matter protester who got beat up at one of his rallies may have deserved it. And, he’s still winning!

A new poll from the Washington Post and ABC News has Trump leading national polls for the fourth straight month, and he’s dominating the conversation on social media: A new Vocativ analysis of social media chatter shows the business mogul turned reality star turned aspiring politician is the most-discussed candidate on Twitter and Facebook.

Over the 98 days that Facebook kept records of the conversation around the different presidential candidates, Donald Trump was the most mentioned on 82 days, beating both Democrats and Republicans, by far. The next most-mentioned candidate on Facebook was Hillary Clinton, who was the top-mentioned on 11 days, and the second-most mentioned on 60 days. Ben Carson and Bernie Sanders were the only other candidates who were ever the top-mentioned candidates, appearing first five and four times, respectively. Sanders largely kept to third place, appearing there on 54 days.

Donald Trump has also consistently dominated the conversation on Twitter, especially around the GOP debates. In addition to winning on social media, the candidate has also stayed on top of his Republican competition in national opinion polls.  The most recent polling data shows Trump as the preferred candidate for an average of 27.5% of Republican voters, nationwide.