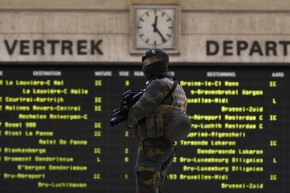 Armed military personnel guarded hotels and railway stations, cafes were quiet and fitness centers were closed across Brussels on Sunday as the city remained on lockdown, according to a slew of tweets coming from the capital of Belgium.

Brussels has been on maximum alert since Saturday—a threat level of four—as more than one suspected Islamist militant in the city remained at large, according to local officials. The threat for the rest of the country was at level three, Belgium’s Crisis Center said in an official announcement on Sunday, adding that it would update on threats later in the day.

The high state of alert was in place as Brussels remained at the heart of a sweeping effort to root out militants in the aftermath of attacks that struck Paris on November 13. Salah Abdeslam, a suspected militant involved in the attacks, was still on the run on Sunday and was thought to have returned to Brussels. One of the men who drove Abdeslam to Belgium told his lawyer that Abdeslam may have been wearing a suicide belt, the BBC reported.

Belgium’s Interior Minister Jan Jambon told Brussels broadcaster VRT on Sunday that Abdeslam was not the only threat to the city. “It is a threat that goes beyond just that one person,” Jambon said. “We’re looking at more things, that’s why we’ve put in place such a concentration of resources.” On Saturday, the Belgian prime minister said at a press conference that Brussels was at risk of attacks that could resemble those in Paris.

Three people have been arrested in Brussels on terrorism charges since the violence hit Paris. The suspected mastermind behind the attacks, Abdelhamid Abaaoud, was killed in a police raid in a Paris suburb on Wednesday.

On Sunday, the Brussels metro was shut down, museums and movie theaters were closed and concerts were also canceled, Reuters reported. Synagogues in the city were also closed this weekend for the first time since World War II, Brussels Chief Rabbi Albert Gigi told Israeli media on Sunday.

Happy to see my favourite bakery is open for Sunday business despite the @BrusselsLockdown #Bruxelles pic.twitter.com/HtiAfXaRxa

Getting married in #Bruxelles on November 21st, 2015. This will definitely be a day to remember. pic.twitter.com/632jACQ5Wo