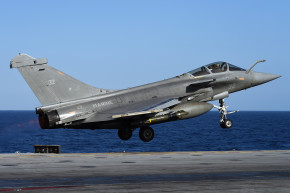 The terror group's propaganda machine claims airstrikes on the Syrian city were ineffective, and continues to threaten France and the U.S.

The Islamic State’s official media wing in the terror group’s so-called capital Raqqa released a video on Sunday claiming to show the aftermath of French airstrikes on the Syrian city and declaring France’s air campaign “a failure.”

The propaganda video, discovered by Vocativ using our deep web technology, insists that ISIS militants were not hurt by strikes that France launched on Raqqa after deadly attacks swept the heart of Paris, killing at least 130 people. Titled “The Failure of the French Bombing” and running eight minutes long, the video features French-speaking ISIS militants insisting France is lying to its people about the nation’s targets as it bombs.

“French people, you should know that you are bombing our hospitals, bakeries, our service providers, our homes and our families and children,” a militant says, as he gives a tour of an area covered in rubble.

Another militant threatens the U.S. “We showed you, Europe, that we are able to execute attacks in your land, and America should not think it can prevent our attacks,” he says.”You should know that we can come to you, wherever you are,” he adds, saying that the Paris attacks “were only a preface.”

A screenshot from the ISIS video allegedly showing rubble in the aftermath of French airstrikes.

The video is part of a wider and relentless propaganda effort by the Islamic State, which routinely releases videos filled with threats and denials that any gains have been made against its “caliphate.”

It comes just days after French President Francois Hollande declared that “France is at war” with ISIS in response to the deadly Paris attacks, for which the Islamic State claimed responsibility. After the violence, France released a barrage of airstrikes it says were aimed at hitting Islamic State targets in Raqqa, including command and recruitment centers, a storage base for ammunition and a training camp, French officials have said.

On Wednesday, the London-based Syrian Observatory for Human Rights said at least 33 Islamic State militants were killed by airstrikes conducted by the French and other warplanes hitting the city.