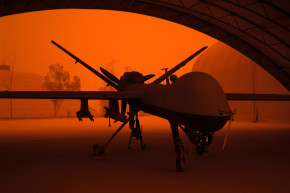 For nearly a century, drones were viewed almost exclusively as military weapons. Now they're one of the hottest items of the holiday season.

The Federal Aviation Agency predicts nearly one million good little girls and boys will be receiving drones this holiday season.

Just five years ago, the FAA projected Americans would own a mere 15,000 commercial drones within the following decade, so the new estimate comes during a massive WTF moment for an agency scrambling to figure out how to keep planes and people safe from millions of flying robots. On November 21, a FAA task force is expecting to release recommendations for a registration system that is meant to protect commercial airplanes from collisions. But that system probably won’t come into effect until after a legion of new young drone enthusiasts fire off their DJI Phantoms on Christmas morning.

You can’t blame the federal government for being caught off guard. For nearly an entire century prior to 2010, drones were viewed almost exclusively as a military device. Here’s a glance at how UAVs moved from battlefields to holiday gift guides.