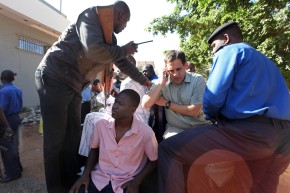 Al Mourabitoun, a splinter militant group, says it's behind the assault and hostage-taking on the Radisson Blu Hotel in capital of Mali

A militant group once linked to al Qaeda and possibly ISIS says it is responsible for the hostage-taking assault on a luxury hotel in the capital of Bamako Friday, in a statement the group has posted online.

AFP reports that 18 hostages have been killed and the remaining captives have since been freed.

On the group’s Tumblr page, al Mourabitoun claimed responsibility for the attack, along with other recent incidents against government and French forces in Mali. The attack in Bamako, the group said, “was carried out by … brave knights in revenge for the Prophet (Mohammed). There will be more details in the future.”

If verified, this would not be al Mourabitoun’s first deadly attack in Mali. The Algeria-based radical group claimed responsibility for a suicide bombing outside a U.N. peacekeeping mission in Mali in April. It is led by Mokhtar Belmokhtar, an Algerian-born man who masterminded the group’s 2013 attack on a natural gas plant in Amenas, Algeria, that killed 40 people, mostly foreign nationals.

Friday’s assault on the Radisson Blu Hotel ignited jihadist supporters online, with supporters of different groups trying to take the credit. On Twitter, supporters of al-Qaida in the Islamic Maghreb have said the group’s fighters stormed the Radisson Blu Hotel, taking 170 people hostage in the shooting rampage. Early reports indicate the gunmen had released Muslims who were able to recite from the Quran as a way as identifying and targeting non-Muslims.

The claim from al Mourabitoun comes as jihadists have been arguing online about the attack. Vocativ used our deep web technology to find chatter emerging about the incident. Islamic State supporters insisted jihadists from Boko Haram were involved, while al-Qaida sympathizers said the attackers are from Ansar al-Din, a terror group operating in Mali that cooperates closely with AQIM.

Confusion over who al-Mourabitoun is affiliated with has been raging since earlier this year, when another leader for the group supposedly declared allegiance to ISIS. However, others quickly reacted to say that the pledge of allegiance was made by Adnan Abu Walid al Sahrawi on his own behalf, and that he wasn’t speaking for any other members of group.

The gunmen were “jihadists” who entered the hotel site in vehicles with diplomatic plates, security sources told the AFP. According to CNN, the gunmen carried AK-47s. They then began moving floor by floor through the hotel, Reuters reported.

Sékouba ‘Bambino’ Diabate, a Guinean singer who was among the people taken hostage, told Reuters that he heard the attackers speaking in English. “I heard them say in English ‘Did you load it?’, ‘Let’s go’,” said Diabate, who was later freed by Malian security forces. “I wasn’t able to see them because in these kinds of situations it’s hard.”

One hostage who made it to safety told France24 television: “I saw bodies in the lobby. What is happening right now is really horrible.”

A spokesman for Air France told Reuters 12 members of their crew were “safe and sound” after initially being held, Turkish Prime Minister Ahmet Davutoglu told Reuters that five Turkish Airline crew members had been rescued.

Chinese media reported at least seven Chinese guests were among the hostages, according to Reuters.

Mali, a former French colony, requested help from France in 2013 to help fight off Islamic militants. A U.N. peacekeeping force took over from the French and African troops in July 2013 after the northern towns had been recaptured from the militants. In July 2014, France launched an operation in the Saleh to root out jihadist groups.

The hostages included 140 guests and 30 employees, reports have said. Among the guests were six staff from Turkish Airlines, as well as Chinese tourists. “I opened the lobby door slowly, slowly, and I saw bullets on the ground,” Michael Skapoullis, who says he has been living in a complex near the Radisson for the last few years, said in a television broadcast.

A French-led offensive ousted Islamist militants from northern Mali in 2013, but attacks against United Nations peacekeepers and Malian forces have persisted, the New York Times reported.