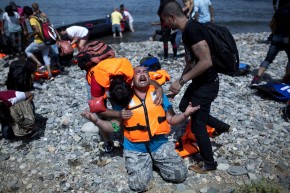 The House has passed a bill which could make it much harder to get refugee status in the U.S.

The House overwhelmingly passed a bill on Thursday that effectively stops Iraqi and Syrian refugees from entering the U.S.— unless the heads of the Department of Homeland Security, FBI and National Intelligence all individually guarantee they pose no threat. Forty seven Democrats broke with Obama to vote yes on the bill that would add hurdles to the already lengthy vetting process refugees face.

The call to stop Syrian refugees gained political capital earlier this week after Friday’s bloodshed in Paris. None of the Paris attackers are believed to be Syrian refugees, though there were reports of a Syrian passport found at the scene of one of the attacks.

Democrats had been expected to reject the Republican-drafted bill H.R. 4038, known as the SAFE Act, but it passed with a veto-proof majority of 289 votes to 137. The Obama administration had claimed it provided “no meaningful additional security” and would create “significant delays” for refugees. On Wednesday night, the White House issued a statement saying if the SAFE Act reached the White House, President Obama would veto it.

The bill would require the FBI, Homeland Security and the National Intelligence director to report to Congress that none of the refugees seeking admission posed a terrorist threat, and certify that adequate background checks had been conducted. It would also require the DHS to submit a monthly report to Congress detailing the number of refugees who applied and detailing the reason each refugee not admitted had their application rejected or tabled. North Carolina Representative Richard Hudson had been working on the bill before the Paris attacks, but his office hustled to complete the proposal in the aftermath, according to the Washington Post.

Potential refugees were already subjected to an interview, security and health screening before their application can be approved by U.S. Citizenship and Immigration Services.