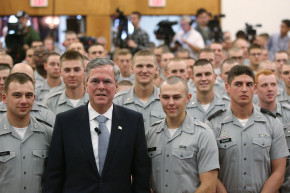 After Bush said he'd defer to military generals before providing a figure, Vocativ called some up

Republican presidential candidate Jeb Bush has a plan for defeating ISIS in Syria and Iraq, and it includes sending U.S. troops into battle. But the actual number he’d approve was missing when he voiced his proposal this week.

“The United States should not delay in leading a global coalition to take out ISIS with overwhelming force,” the GOP hopeful told an audience of cadets at The Citadel, a military college, in South Carolina on Wednesday. “Militarily, we need to intensify our efforts in the air — and on the ground.”

Instead of specifying a number of American boots on the ground, the former Florida governor said those forces “should be in line with what our military generals recommend.”

So just how many troops would the U.S. actually need to take out ISIS? To find out, Vocativ spoke with two former U.S. generals and a military historian, all of whom said the Obama administration’s use of airstrikes, munition drops and a limited number of American special forces in Syria and Iraq alone would not succeed in destroying the terror group. They believe the U.S. doesn’t need to send 50,000 troops to defeat ISIS. That was the figure floated by President Obama this week in Turkey when he defended his administration’s strategy — hitting out at some critics who’d suggested that level of deployment was necessary to take ISIS out.

Instead, it would require as few as two U.S. military brigades, or about 10,000 ground troops, to deliver a crippling blow to ISIS across the territory it currently controls, declared Anthony Zinni, a retired Marine general and former chief of the U.S. Central Command. He said the mere presence of these American boots on the ground would be enough to rally thousands of beleaguered Syrian rebels and Iraqi security forces. Together, the combined U.S. and coalition fighters could then launch an offensive capable of overwhelming jihadist fighters in ISIS strongholds like Mosul, Ramadi, and Raqqa.

“We could dispatch ISIS in a short time and let Iraqi forces replace coalition forces over time with support capabilities,” Zinni told Vocativ.

David Johnson, a military historian and retired Army colonel, embraces a similar strategy, one he admits that many in Washington view with deep skepticism. He argues that defeating ISIS will require a complete rethinking of the strategy that has guided the U.S. military for much of the past 14 years.

More ISIS Mission Creep: A Brief History Of US Forces In Syria

That strategy is one that’s far different, and far less involved, than the campaigns waged in Afghanistan and Iraq, Johnson said. It would require neither nation-building nor the type of counterinsurgency orchestrated under the leadership of Gen. David Petraeus when he commanded U.S. troops during critical moments in both the Afghanistan and Iraq conflicts.

“This is about destroying the caliphate,” said Johnson, who published a detailed analysis of his proposed strategy over the summer. “It’s as simple as that. If there’s no caliphate, there’s no base of operation from which these guys can build and expand. Where the hell does ISIS go?”

Though he would not offer an exact number, Johnson believes such an offensive would require fewer U.S. forces than the 20,000 deployed to Iraq during the 2007 troop surge. At the height of the war, the U.S. had more than 170,000 combat troops in Iraq. At the same time, Johnson said his plan requires American troops to directly engage in combat against ISIS fighters, putting them directly in harm’s way.

Like Zinni, Gen. Mark Kimmitt, a retired brigadier general and former assistant secretary of state under President George W. Bush, also believes that it would take roughly 10,000 American troops to recapture ISIS territory from the jihadist group. But unlike Johnson, he envisions them to be in an “expanded advise, assist and accompany role” that bolsters local and regional forces.

“There is no discussion about U.S. combat formations doing the fighting, firing the artillery or manning the tanks,” Kimmitt told Vocativ. “It’s not a direct combat role, although the advisors will be operating in a combat zone.”

Each of the military experts who spoke with Vocativ said that U.S. troops would quickly withdraw from the conflict once ISIS was defeated. Each assumed that Syrian and Iraqi forces would be able to responsibly provide security and stabilize the area, with U.S. advisors in a back-up, logistical support role.

None would be drawn on the possible number of U.S. casualties those scenarios might incur.

Even with the promise of few troops and a short timetable, an intensified ground effort by the U.S. may remain a political pipe dream. Despite a majority of Americans now in favor of the U.S. escalating its attacks against ISIS, nearly 76 percent are still opposed to deploying ground troops, a Reuters poll reported this week. Moreover, few among Obama’s circle are convinced that regional forces in Syria and Iraq would be capable of halting the type of political vacuums created in Afghanistan and Iraq after U.S. troop withdrew.

“It is not just my view, but the view of my closest military and civilian advisers that [a troop deployment] would be a mistake,” Obama said in Turkey this week. “Not because our military could not march into Mosul or Raqqa or Ramadi and temporarily clear out ISIL, but because we would see a repetition of what we’ve seen before, which is if you do not have local populations that are committed to inclusive governance, and who are pushing back against ideological extremes, that they resurface unless we’re prepared to have a permanent occupation of these countries.”

Johnson believes that it’s a risk that must be taken. “ISIS is a cancer metastasizing,” he said. “As long as they have a base they can continue to build up strength and send people out.”