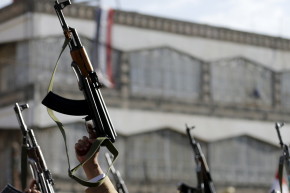 Crowdfunding For Guns: Another Use For Telegram App
By Gilad Shiloach

Crowdfunding For Guns: Another Use For Telegram App

A channel is devoted to raking in cash for rockets, machine guns and anti-tank missiles as other accounts across the messaging app are being shut down

A crowdfunding campaign on the cloud-based messaging app Telegram aims to rake in cash for rockets, machine guns and anti-tank missiles as jihadists’ accounts across the platform are being shut down.

It is unclear who is behind the campaign, but its cause indicates it seeks to raise money for Palestinian fighters in the Gaza Strip. “The campaign aims to equip the Mujahideen of Jerusalem,” says a post on a Telegram channel devoted to the effort. Called “Recruitment for Al Aqsa”—the third-holiest site in Islam—the weapons initiative was also launched on October 5, amid a spike in Israel-Palestine violence.

“The Aqsa mosque needs men, not just words and slogans,” a post on the channel reads. “If you are not one of its men, then be one of those equipping them. And if you can’t help with money, then spread the message of the campaign to those who can.”

The campaign is just one of the ways the app has been used to support terror. Over the last two months, supporters of the Islamic State increasingly turned to the platform to disseminate murderous propaganda and communicate.

But this week, after a string of deadly terror attacks stuck the heart of Paris, the app cracked down. ISIS-related channels were reportedly deleted, including one called Nasher with 18,000 followers—the largest ISIS channel circulating the terror group’s propaganda.

By Thursday afternoon, the weapons campaign remained on the app, advertised with a set of colorful posters. One outlined how much money is needed for a “kit” that includes a Kalashnikov, cartridges, a military vest, military shoes and a combat uniform: $2,500.

The campaign amid persistent Israel-Palestine violence following weeks of unrest that centered in Jerusalem and the West Bank, but which has spread to other areas. Reports on Thursday said a man was killed and two others were injured in Tel Aviv in the latest in a spate of stabbing attacks against Israelis.

Another campaign called “Recruitment for Al-Aqsa” surfaced last year, Vocativ found. It circulated in online ISIS channels in an effort to establish a jihadist force with the goal of “liberating Jerusalem.”