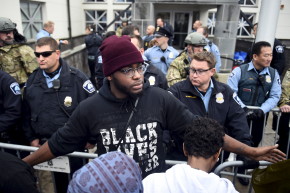 Dozens of activists protested at the Minneapolis Police Station on Wednesday night hours after the police identified the officers who fatally shot Jamar Clark on Sunday. The demonstrations are the latest in a year of Black Lives Matter protests that roiled the country and sent shockwaves through black communities hard hit by police brutality.

There have been more than 500 Black Lives Matter demonstrations in the past year throughout the country, including several protests in neighboring Wisconsin.

Clark, 24, was taken off life support on Monday, his family said. Eyewitnesses said he was unarmed and handcuffed. Minneapolis Police Union President Lt. Bob Kroll said Wednesday that Clark was not handcuffed and reached for the officers’ guns, according to the Minneapolis Star-Tribune.

Officer Mark Ringgenberg and Officer Dustin Schwarze are the two officers involved in Clark’s shooting, according to the Minnesota Bureau of Criminal Apprehension. Both have been placed on administrative leave, Fox 9 reported.

Shortly after the shooting, Black Lives Matter and the NAACP called for protests in Minneapolis. On Monday night, 51 people, including eight juveniles, were arrested after shutting down a portion of I-94. On Wednesday, protesters gathered at the downtown police station, according to reports on social media.

Confirmed: @MayorHodges called for a meeting with us, then raided the #4thPrecinctShutDown while leaders were off site. #JamarClark yep.

"This is not only about Jamar. This is our block. This is where we come from. I had my kids here." #Justice4Jamar https://t.co/me2N6RUKW7