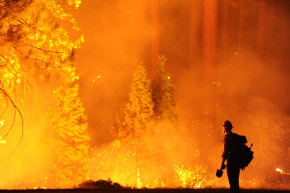 These At-Risk States Are Not Ready For Climate Change
By Joshua A. Krisch

These At-Risk States Are Not Ready For Climate Change

As climate change brings heat waves, droughts and flooding, some states are better prepared than others

There’s a scientific consensus that by 2050, the United States can expect to see an increase in flooding, heat waves, droughts and wildfires due to climate change.

Now, scientists at Climate Central and ICF International have produced the first Preparedness Report Card for the United States, highlighting how states are preparing for the projected disasters. The report examines the likelihood of five major threats expected to affect each state by 2050 (extreme heat, drought, wildfires, inland and coastal flooding) and analyzes whether state governments are prepared to protect their vulnerable populations and economic sectors.

Here’s a summary of each state’s overall scores:

Only five states (California, Massachusetts, New York, Pennsylvania, Connecticut) nabbed an “A” grade overall; Texas, Nevada, Missouri, Mississippi, and Arkansas each earned an “F”. The fact that Texas, Florida and California face the most serious climate threats but earned an F, C and A, respectively suggests a real disconnect between the threats that some states face and the investment they’re willing to make in preparing for disaster.

As long as disaster preparation is handled at the state level, there will likely be a wide range of responses to these looming threats. California, a state vulnerable to virtually every climate ill from coastal flooding to wildfires, consistently demonstrates a high degree of preparedness. Texas, a state that faces many of the same extreme weather threats, consistently refuses to do anything about it.

When the researchers analyzed individual threats, the results were slightly different. Although Maine earned a D overall, the data suggest they are fairly well-prepared to respond to drought. Florida earned a C- overall, but nabbed a B+ in both drought and wildfire preparedness. And Louisiana, where the memory of Hurricane Katrina is still strong, has invested heavily in coastal flooding, even though it earned a C rating overall. (States that do not face a specific threat were not graded on those particular threats).

Obviously, some states are more vulnerable to certain disasters than others. Indeed, Red States in the Midwest face fewer coastal flooding threats (although those along the Great Lakes have cause for concern) but extreme heat threatens all fifty states—regardless of whether or not their individual governments deny climate change. At the very least, one would hope to see all fifty states preparing for extreme heat. Unfortunately, only seven states received A ratings in this category, while 18 states received a “D” or an “F”.

Inaction “poses a significant risk to our economy, our infrastructure and our lives,” Mark Begich, a former senator from Alaska, said in a press conference. “Very few states have taken sufficient actions to prepare for [threats] they’ll face in the future and surprising number of states have taken almost no action.”