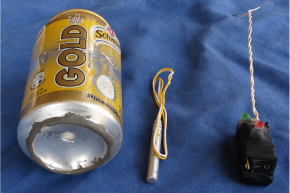 ISIS published an “EXCLUSIVE” photo of a soda-can bomb it claims it used to take down a Russian passenger plane as it flew over Egypt’s Sinai Peninsula last month.

The picture, which Vocativ found using our deep web technology, appears in the newest issue of Dabiq, the Islamic State’s propaganda magazine. It shows a Schweppes pineapple juice can outfitted with an improved explosive device. The magazine claims the IED was smuggled aboard a Russian Metrojet flight and detonated. The photo hasn’t been verified but multiple governments have said a bomb was or might have been behind the October 31 attack, in which all 224 people on board died.

A later article in the new issue, entitled “Just Terror,” says that two prisoners, a Chinese man, Fan Jinghui, and a Norwegian, Ole Johan Grimsgaard-Ofstad, were executed by ISIS. It describes how they were killed and says the men had been “abandoned” by their home countries. Previous issues of the terror magazine had advertised that ISIS held the men in captivity. The magazine also shows photographs of the mayhem on the streets of Paris after last Friday’s attacks, for which it claims credit.

In a section on the Russian plane, ISIS offers details on why it carried out the vicious act targeting civilians. “This was to show the Russians and whoever allies with them that they will have no safety in the lands and airspace of the Muslims, that their daily killing of dozens in Shām through their airstrikes will only bring them calamities, and that just as they kill, they will be killed, by Allah’s permission,” the magazine, published in English, reads.

The Islamic State already claimed responsibility for downing the passenger aircraft and has continued to insist it was behind the attack. But it did not provide any additional information until Wednesday.

More ISIS Forum Features Manual On How To Build Bombs, Blow Up Planes

U.S. and British officials have said a bomb could have been responsible for the crash, and the image claiming to show the IED was released a day after Moscow said for the first time a bomb brought down the plane, slamming it as a “terrorist act.”

Russia’s President Vladimir Putin promised on Tuesday to intensify the country’s military operations in Syria—where Russia has been waging an airstrike campaign since late September—in retaliation. “Our aviation should not simply continue military operations in Syria,” Putin said, “but enhance them so as to make it clear to the criminals that vengeance is inevitable.”

Earlier this month, Vocativ’s deep web analysts found an instruction manual explaining how to build bombs and slip them past airport security that was posted on a main ISIS forum. The guide was prominently positioned on the forum, which featured a discussion about the manual—showing just how easy it is for ISIS-affiliated jihadists to access information about building and using homemade explosives to blow up an aircraft.