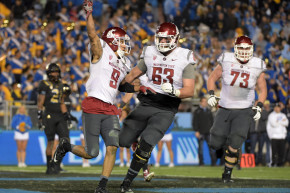 The Best Bets In College Football
By Noah Grand

The Best Bets In College Football

Washington State, long dormant in the Pac-12, has been literally beating the odds this season.

To the casual college football fan, the 24th-ranked Cougars’ 7-3 record (5-2 in the Pac-12) is pretty good, but to those who like to put a little something on the games, Wazzu’s unreal record against the point spread is one for the book(ie)s.

To illustrate how wildly divergent a team’s winning percentage against the spread (ATS) can be from its record straight up, Vocativ calculated both percentages and subtracted their ATS record from their actual performance.

Washington State didn’t need any of the 9.5 points it was getting against the then 19th-ranked UCLA Bruins at the Rose Bowl. Cougar quarterback Luke Falk, who literally crawled off the field after a violent sack in the first half, passed a concussion protocol and came back to lead Washington State on a 75-yard touchdown drive in 66 seconds, scoring on a 21-yard pass to Gabe Marks with three seconds remaining.

Against the spread, Washington State is a stellar 8-2, but drilling down, it is the Cougs’ record ATS as a visiting team that has heads spinning in Las Vegas. Washington State is a perfect 5-0 ATS in away games and has been an underdog in every one of them, including last Saturday’s thrilling 31-27 win over UCLA.