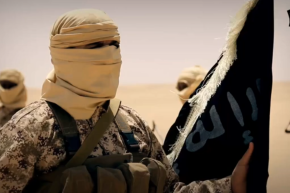 A little-known social media platform is quickly becoming infamous as a breeding ground for ISIS terror.

Islamic State supporters, who’ve long used Twitter and other mainstream social media platforms, have been increasingly converging on Telegram. The messaging app, based in Berlin, allows users to send encrypted messages between one another. That may prove a boon to jihadists, while making it more difficult for law enforcement officials scrambling to hunt the terror group’s adherents online. Telegram also has rarely banned users for distributing violent content or recruiting propaganda. (Update: After Vocativ published this story, Telegram announced that it had blocked 78 Islamic State-affiliated channels in 12 different languages. The move is unprecedented for Telegram, which had in the past shied away from blocking or suspending controversial accounts.)

More ISIS Adherents Taunt West: “We Are Waiting For You And Your Doom”

After Friday’s shockingly well-coordinated attacks on the city of Paris evaded the detection of counter-terrorism officials, ISIS loyalists’ use of the platform rekindled the debate over how government monitors terror groups, often with a heated and frustrated focus on opaque platforms like Telegram.

“There are a lot of technological capabilities that are available right now that make it exceptionally difficult, both technically as well as legally, for intelligence and security services to have the insight they need to uncover,” said CIA Director John Brennan during an intelligence conference on Tuesday.

While it’s impossible to know to what extent, if any, ISIS militants and their supporters are using Telegram’s encrypted messaging services to groom new terror recruits or coordinate attacks, the group has reportedly encouraged followers to download the app. And terrorism experts say the flurry of activity by the group and its supporters on visible portions of the platform are already alarming.

In September, Telegram unveiled a new feature that allows individual users to share information with an unlimited number of anonymous subscribers. ISIS has since used that function to build a sweeping network of so-called Telegram “channels” on the site. The jihadist group’s largest propaganda channel, Nasher, has more than 16,000 subscribers, who are fed a steady diet of official videos and announcements. ISIS also has dozens of smaller channels organized by region, language and topic. Many of them have hundreds, some have thousands, of subscribers.

Calls to violence on Telegram have only intensified since ISIS claimed credit for last week’s terror attacks in Paris. Jihadi sympathizers flooded Telegram channels with a series of vile memes, including photoshopped images that depict the Eiffel Tower engulfed in flames and ISIS militants towering over scenes of mayhem and destruction. On Monday, Telegram lit up with an ISIS video clip that showed militants vowing to attack Washington, D.C.

“These channels can be expected to become a fertile and secure arena for jihad-related activities,” wrote the Washington-based Middle East Media Research Institute in a recent report.

ISIS’ success on Telegram has been noticed by other militant groups. Using its deep web technology, Vocativ found channels in support of al-Qaeda affiliates in Syria and Yemen, as well as Iranian-backed Shiite militias. All of them formed after the Islamic State publicly took to Telegram. Some of these channels, like the one promoting the activity of Jabhat al-Nursa, Syria’s al-Qaeda affiliate, have thousands of subscribers.

The growing appeal among militant and terror groups is underscored by several factors, experts say.

Unlike Facebook or Twitter, which regularly suspends accounts, Telegram does not ban violent or gruesome images and there’s no way for users to report disturbing content. Because channel subscribers aren’t permitted to respond or post content of their own, efforts like that being waged by the U.S. State Department to counter or undermine ISIS propaganda messaging are not possible on the site. Even Anonymous, which claims to have hacked or crippled thousands of ISIS Twitter accounts and online forums, has been ineffective on Telegram.

“The message on Telegram becomes much more concentrated, with no apparent way of diluting it,” Charlie Winter, a terrorism analyst specializing in the Islamic State, told Vocativ. “It seems foolproof.”

The platform’s inaccessibility is largely by design. Pavel Durova, the creator of Telegram, has said he built the social media platform with user anonymity at the center. Durova, a co-founder of the popular Russian social-networking site VKontakte and frequent critic of President Vladimir Putin, fled the country last year.

“The number-one reason for me to support and help launch Telegram was to build a means of communication that can’t be accessed by the Russian security agencies,” Durov said in an interview in 2014.

That kind of anonymity is what has Brennan, the CIA director, and other counter-terrorism officials, including FBI director James Comey, fearful.

“I would anticipate that this is not the only operation that [ISIS] has in the pipeline,” Brennan said on Tuesday, referring to the Paris attacks. “Security intelligence services right now in Europe and other places are working feverishly to see what they can do in terms of uncovering it.”