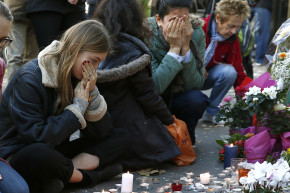 ISIS is grabbing the world’s attention with brazen terrorist attacks, but the group is feeling the heat at home

ISIS recently suffered a series of setbacks inside its Iraqi and Syrian strongholds. In October, it lost control of a key oil refinery in Iraq. Just last week, Syrian government forces recaptured a strategically important military base that ISIS had seized, and U.S. and Kurdish forces wrested control of the Iraqi town of Sinjar from the group.

This is the local story, the home game.

But on the international stage, ISIS is grabbing the world’s attention with spectacular terrorist attacks that have killed close to 400 people and injured hundreds more in the last two weeks alone.

This has led intelligence analysts and terrorism experts to question whether deadly attacks like Friday’s in Paris stem from a sense of desperation or strength for the group. The short answer: it could be both.

“On the one hand, ISIS is clearly feeling the heat from a more aggressive air campaign targeting its infrastructure in Syria,” said Colin Clarke, a counterterrorism expert at the Rand Corporation. “However, it takes a certain degree of confidence and competence to even attempt, much less succeed, with such a brazen terrorist attack on European soil.”

On Monday, information about the Paris attackers’ exact links to ISIS was still emerging. So far, with the information that’s been made public, it’s clear that the Paris attacks were not just inspired by ISIS, but that at some level, ISIS commanders were behind the scenes. Intelligence officials were trying to determine to what extent ISIS leaders in Raqqa, the capital of the group’s self-declared caliphate, maintained direct command and control of the attacks, but CNN reported Monday that six of the eight known attackers had spent time in Syria.

“The fact that suicide attacks were part of it, that multiple locations were selected, indicates to me a serious degree of discipline, training, and logistical capability,” Clarke said.

Analysts at IHS Jane’s Terrorism and Insurgency Center say ISIS has been attempting this strategic shift for almost a year, noting previous terrorist plots in Europe that, while disrupted, showed the “group’s intent to use fighters returned from Syria to launch mass-casualty attacks with small arms in European urban centers.”

Details are still emerging about who and what caused the Oct. 31 crash of a Russian plane in Egypt in which all 224 people on board were killed, but it is believed that ISIS or a local ISIS affiliate is most likely responsible. On Tuesday, Russia said for the first time that a bomb downed the aircraft, and called it a terrorist act. The investigation is focused on the staff who may have had access to the plane at Sharm el-Sheikh’s airport.

If ISIS was able to have its affiliate group in the Sinai either smuggle a bomb on board the plane or to recruit somebody who worked at the airport, it means ISIS is at the “next level of sophistication in terms of its recruitment,” said Mia Bloom, a terrorism expert at Georgia State University.

Friday’s attacks in Paris could also be aimed at stepping up ISIS’ recruitment, which has waned since its peak a year ago.

“If Islamophobia increases as a result of these attacks, then some Muslims in France could gravitate toward ISIS, thinking, ‘I guess they’re right. There is only one place we can be safe and that would be in Raqqa.’ And more people will go [to Syria] and fewer people will leave,” Bloom said.

The Paris attacks could also feed the “clash of civilizations” narrative, which ISIS embraces and which also helps with recruitment, Bloom said.

ISIS would know that Friday’s attacks in Paris and downing the Russian plane would lead to an intensification of military operations against it, but this is exactly what the group wants, according to Matthew Henman, head of IHS Jane’s Terrorism & Insurgency Center.

Six of the seven attackers who died during Friday night’s attacks in Paris detonated suicide vests. (One was killed by police.)

Bloom has researched what leads terrorist groups to resort to suicide attacks, looking into whether it’s an indicator of strength or weakness.

“It wasn’t always necessarily the strongest or the dominant group, but very often it was the group going, ‘Notice me! Notice me!’” she said.

With so many franchises and local groups aspiring to be a part of ISIS, pulling off daring terrorist attacks could be a way to gain attention among the crowd.

“We saw this a lot with the al Qaeda affiliates,” Bloom said. “They would push the envelope, doing things that the core of al Qaeda wasn’t yet doing. For example, using women, going after [chemical, biological, radiological and nuclear] weapons. That’s where we saw a lot of the innovation.”

Historical research also indicates that suicide bombings can be used “to project power in a way that masks an underlying weakness,” according to Bloom.

“The fact that suicide attacks were part of it, that multiple locations were selected, indicates to me a serious degree of discipline, training, and logistical capability.” —Colin Clarke, counterterrorism expert at the Rand Corporation

And it does seem as if ISIS has weakness for which it would like to compensate. It has suffered clear tactical defeats in Iraq and Syria, even if it has not been pushed back at the pace the U.S. government had forecasted.

Perhaps the biggest defeat for ISIS was in Kobani, a town along the Syrian-Turkish border. Kurdish forces backed by U.S. airstrikes fought to retake the town and its surrounding villages for months and finally succeeded last spring. The town held little strategic value, but the battle claimed more than 2,000 ISIS fighters, and the loss took a heavy toll on recruitment, according to one ISIS defector, who told The Daily Beast that recruits dropped from a peak of 3,000 foreign fighters a day to 50 or 60.

More recently, Iraqi forces and Shiite militias recaptured the Baiji oil refinery, and pushed ISIS militants out of Sinjar in northwest Iraq. In Syria, forces loyal to President Bashar Assad, with the support of Russian airstrikes, lifted a three-year siege on the Kweres airbase.

The U.S. also carried out two high-profile assassination strikes last week. The first targeted Mohammed Emwazi, ISIS’ most famous executioner who came to be known as “Jihadi John,” and the second strike is supposed to have killed Abu Nabil, aka Wissam Najm Abd Zayd al Zubaydi, the leader of ISIS in Libya.

According to data collected by IHS Jane’s Terrorism and Insurgency Center, the Islamic State “has consistently been losing territory since July and has also lost revenue, reducing its ability to pay fighters.”

But thinking of ISIS in terms of home vs. away victories or setbacks might not be useful, says Clarke. For example, ISIS can reach anywhere in the world to recruit and inspire through social media.

It’s not just attacks on the West that are on the rise, either. ISIS has also stepped up bombings across the Middle East and North Africa, attacking a mosque in Saudi Arabia in August and a pro-Kurdish rally in the Turkish capital of Ankara in October. And a double-suicide bombing in Beirut on Thursday killed 43 people.

While these attacks are outside of Iraq and Syria, for ISIS they still constitute the “near enemy,” argued Bloom. “I still think their priority is to get rid of the Shia and to maintain the caliphate and they’ll do so in any capacity that they can,” she said.

And just because ISIS may be losing some battles and territory at home, it doesn’t necessarily mean it’s going to become any less dangerous to Western countries.

After the group was pushed out of its urban strongholds, “its strategy and operations shifted from conventional fighting and insurgency to terrorist attacks,” Watts wrote in an essay published Monday by War on the Rocks, a website devoted to foreign policy and national security analysis.

“Today, al Shabaab holds a fraction of the territory it once dominated, but continues to launch fierce terrorist attacks against soft targets,” Watts wrote. “If an extremist group that has seized territory starts to lose it, it will be highly incentivized to turn to terrorist operations that allow for maximizing effects at a lower cost.”