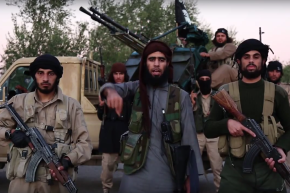 “We say to the countries taking part in the Crusader campaign that as we struck France in the heart of their homes in Paris, we swear to strike America at its heart in Washington,” a militant said in the video. “We are saying to the European countries that we are coming to you with explosives and bombings, (suicide) belts and silencers.”

The clip, distributed by the Islamic State’s official media wing in Salah el-Din, Iraq, was released as part of a three-part video series published by ISIS branches across the region. The terror group threatened countries involved in what it called the “Crusader campaign,” referring to U.S.-led coalition airstrikes against ISIS in Iraq and Syria.

France dropped 20 bombs on Raqqa, Syria on Sunday night, targeting ISIS strategic points in retaliation for Friday’s terrorist attacks in Paris. The Islamic State claimed responsibility for the horrific violence that left at least 129 people dead and injured hundreds of others.