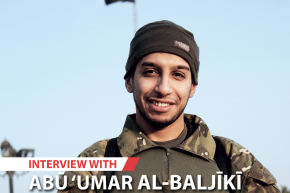 The alleged mastermind behind the terrorist attacks in Paris that killed at least 129 people bragged about escaping “crusader intelligence” and mocked efforts to capture him during an extensive interview in ISIS’s English-language magazine, Dabiq.

In the interview, published in February, Abdelhamid Abaaoud, a 27-year-old Belgian extremist, also detailed his attempted attack in the Belgian town of Verviers that resulted in the deaths of two militants in January. The magazine was circulated in February on the group’s social channels and on the deep web, where ISIS typically distributes its propaganda.

Abaaoud said he escaped to Syria after the attempted attack despite being chased by intelligence agencies. “All this proves that a Muslim should not fear the bloated image of the crusader intelligence,” he said. “My name and picture were all over the news yet I was able to stay in their homeland, plan operations against them, and leave safely when doing so became necessary.”

Abaaoud, who used the nickname Abu Umar al-Baljiki, claimed he was nearly halted by authorities. “I was even stopped by an officer who contemplated me so as to compare me to the picture, but he let me go, as he did not see the resemblance!” he said. “This was nothing but a gift from Allah.”

Abaaoud also claimed that his two co-conspirators in the attempted Belgium attack were in a safe house when the police “raided the place with more than 150 soldiers from both French and Belgian special forces units.” Abaaoud said an ensuing gun battle lasted about 10 minutes, and that “both brothers were blessed with shahādah [martyrdom], which is what they had desired for so long.”

A picture of Abbaoud published in Dabiq Magazine

In the interview, Abbaoud attempted to justify his attempted attack, saying “Belgium is a member of the crusader coalition attacking the Muslims of Iraq and Shām [Syria].”

The Belgian extremist fought alongside ISIS in Syria. He also was allegedly involved in foiled attacks on a Paris-bound high-speed train and Paris area church. He is believed to be in Syria and became known by authorities when he was pictured at the wheel of a car moving bodies to a grave in an ISIS video, Belgian media reported, according to the AFP.

Abbaoud is said to be from Molenbeek, in Brussels, where multiple arrests and police raids have taken place since Friday’s horrific violence. Other raids swept Paris Sunday night and into Monday morning as French police searched homes of suspected militants, French Prime Minister Manuel Valls has said.