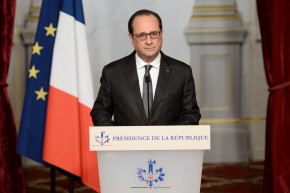 So far there's been no reports of fatalities, but the French defense ministry said all intended targets were hit

French fighter jets dropped 20 bombs on Raqqa, the city in eastern Syria ISIS claims as the capital of its self-declared caliphate, the French defense ministry said Sunday. The airstrikes came less than two days after ISIS claimed responsibility for a series of terrorist attacks in Paris that killed 129 people and wounded hundreds more.

The targets were said to have included an ISIS command center, recruitment center, anammunition storage base and a training camp. Michael Soria, press advisor for France’s defense minister, said they were all hit and all were destroyed.

Both supporters of ISIS and its opponents posted online that there had been no casualties reported so far.

Translation: “Thirty bombs from French planes on places in the city of Raqqa, no injuries, thank God.”

Translation: “Heavy bombing on Raqqa, Daesh stronghold, and capital of Islamic State in Syria, the planes are bombing and have cut off electricity, (ISIS leader Abu Bakr al-) Baghdadi will survive.”

The Raqqa-based activist group Raqqa Is Being Slaughtered Silently tweeted Sunday there were no known civilian injuries or fatalities. The group said airstrikes hit a stadium, museum, hospital clinics and government buildings.

The bombing campaign against ISIS was expected to escalate. Ben Rhodes, the U.S. deputy national security adviser, said he was confident that in “coming days and weeks” the U.S. and France would “intensify our strikes against [Isis] . . . to make clear there is no safe haven for these terrorists.”