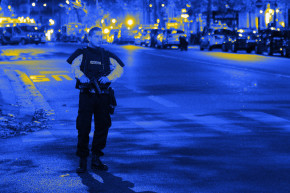 French authorities arrested 188 people for religious-inspired terrorism in 2014, more than double that of any other European country

France made more arrests in 2014 related to “religiously inspired terrorism” than any country in Europe, according to Europol data.

The terrorism arrest figures, published in Europol’s Terrorism Situation and Trend Report, show that French authorities made 188 arrests in 2014, eclipsing Belgium, where 71 arrests were made, and Spain, where authorities arrested 34 people. Authorities broadened their investigation throughout Europe Sunday in the aftermath of the Paris attacks on Friday night that killed at least 129 people.

French authorities thwarted at least two attacks in 2014, according to the Europol report, and made several arrests relating to persons traveling to and from the Syrian conflict. France reported an 86 percent increase in people going to Syria and Iraq in 2014. Arrests were spread across the country, and almost one quarter of those arrested were women, the report said.

Arrests relating to religiously-inspired terrorism have increased dramatically across Europe since 2011. A number of people suspected of planning attacks were also arrested in Austria, Italy and the Netherlands in 2014, while Spain’s terrorism arrests were made mostly in connection with recruitment charges, according to the report.

In 2014 in France, a series of apparent religious-inspired acts of terror were carried out by jihadists or men with suspected ties to terrorist organizations. In March, a shooting at a Jewish school by a gunman on a motorcycle killed four, including three children. In May, a man who claimed to be an al-Qaeda operative took four people hostage in a bank in southwestern Toulouse, France. In December, there were three attacks on three consecutive days. In two of those attacks, men ran over pedestrians with a car, while in another, a man stabbed three police officers in a Tours suburb.