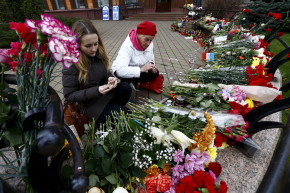 Father, Student And Writer Among The Victims Of Paris Violence
By Leigh Cuen

Father, Student And Writer Among The Victims Of Paris Violence

Citizens from at least 15 countries lost friends and family members in the shocking terrorist attacks that struck sites across Paris on Friday. The death toll rose to 132 on Sunday, with more than 350 injured—dozens critically.

A California student studying abroad, a French writer, a man who sold merchandise for the band that was performing when attackers opened fire as well as a father of two were among the 129 people killed on Friday in the devastating violence.  Three people who were critically injured have also died and 42 people remained in intensive care on Sunday, the AFP reported.

More This Is Who We Lost: Profiles Of Paris Victims Begin To Surface

One particularly heartbreaking story is that of 30-year-old Thomas Duperron, a passionate music connoisseur who worked the famous French concert venue La Maroquinerie and volunteered for the local World Aids Day campaign. Dupperon was among the injured in an attack at the The Eagles of Death Metal concert at Le Bataclan theater on Friday that killed at least 89 people. One of the last times Duperron posted online was with a geo-tagged Facebook post and tweet from the concert at Le Bataclan.

It appears that his loved ones didn’t know where he initially was following Friday’s attacks, and they created a Facebook group dedicated to tracking Dupperon down. It quickly drew over 7,000 members.

Dupperon later died from his injuries, his brother has said.

On Monday, victims were still being identified as two more attackers were named: Syria-born Ahmad Al Mohammad, 25, and Paris-born Samy Amimour, 28, according to reports. The suspected mastermind of the violence has also been identified as Abdelhamid Abaaoud, 27, a Belgian extremist.