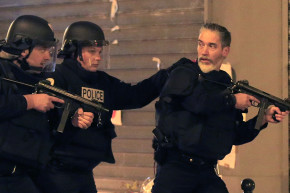 Manhunt Unfolds Across Europe As New Details About Attackers Emerge

Authorities are widening an investigation for the 8th Paris attacker, who is believed to still be at large

A manhunt is underway across Europe for the sole surviving assailant of Friday’s terror attacks in Paris, who French officials now say was questioned by police hours after the deadly rampage but later let go.

French police on Sunday released an arrest warrant for Salah Abdeslam, 26, a French national believed to be a suspect in the terror attacks that left at least 132 dead and hundreds more wounded. Abdeslam should be considered dangerous, the release warned, and people should not “intervene.” Four French officials told the Associated Press late Sunday that Abdeslam had been questioned by police the same night and later released, the news service reported on Twitter.

One of Abdelslam’s brothers, Ibrahim, is reported to have died during the three-hour massacre. Another brother, Mohamed, was reportedly arrested in Brussels on Saturday for his involvement. Abdeslam was born in Brussels, but lived in France—fueling fears are growing that the sophisticated series of attacks were planned inside France by homegrown terrorists.

The hunt for Salah Abdeslam began when police found a black sedan, thought to be a getaway car, abandoned in a Paris suburb. In the car were 3 Kalashnikov rifles, the type of weapon used by the attackers.

Information continues to emerge about the rest of the attackers who wreaked havoc across Paris on Friday. Here’s else what we know about the others:

This is a developing story, check back for updates.