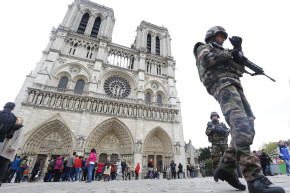 ISIS Terrorist May Have Hidden Among Refugees Before Horrific Attacks

The Islamic State claimed responsibility for a string of unprecedented and horrific terrorist attacks in Paris that killed at least 127 people on Friday — and the extremists warned France that the nation remains a top target.

In identical audio and text statements, which Vocativ discovered using our deep web technology as the messages were initially posted on social media platforms and online ISIS forums, the Islamic State’s official media wing said eight “brothers” wearing explosive vests and carrying guns targeted “carefully selected sites” in Paris in coordinated attacks. The highly-coordinated attacks were orchestrated by three teams of people, including one who is believed to have passed through Greece in October with a Syrian passport on the migrant route.

“They did this in the name of Allah,” the statements said, “and Allah strengthened the hands of the warriors and put fear and terror in the hearts of the crusaders.” ISIS said the violence—which unraveled at a concert hall, outside of France’s national stadium and at other popular spots across the French capital—”shook the streets of Paris under their feet.”

The terror group issued an ominous warning. “France and those who follow its ways should know that they remain at the top of the Islamic State hit list and that the smell of death will not leave their noses as long as they continue on their crusade and continue to insult the Prophet and boast their war on Islam in France while attacking Muslims in the land of the caliphate,” the Islamic State said.

The statements were published after ISIS supporters already started celebrating the massacre with hashtags declaring “Paris in flames” on Friday night within moments of the erupting violence, as first reported by Vocativ. “Allahu Akhar,” one declared. “The infidels were happy in the liberating of Sinjar at the morning, and at night they slap themselves for Paris,” said another.

French President Francois Hollande on Saturday called the attacks “an act of war” and said they were “organized and planned from outside.”

France has declared a state of emergency and ordered France’s borders closed. President Obama called the violence an “outrageous attempt to terrorize innocent civilians” in a statement Friday night, and said the U.S. would stand with its French allies.