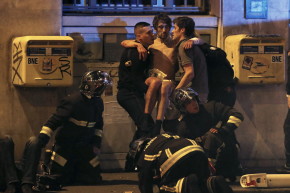 Rampaging terrorists killed 118 people during a hostage crisis at a Paris theater Friday, one of six coordinated terror attacks that convulsed the French capital. Gunmen stormed the venue as a concert was starting and fired into the crowd. Shootings and explosions left scores more dead at bars and restaurants across the city, leading France President Francois Hollande to call in the military.

Police freed the hostages early Saturday, killing at least two attackers. Eyewitnesses described the scene inside the Le Bataclan theater as a massacre.

“Please come help us! They are shooting people one by one! First floor, quick!” wrote one Facebook user from inside the venue in Paris’ 11th Arrondissement. Julian Pearce, a journalist with Europe 1 who was inside the concert hall when the attack began described two or three masked men entering the theater with automatic weapons and beginning to shoot “blindly” into the crowd.

The first shooting took place at a Cambodian restaurant in the city’s 10th Arrondissement Friday evening. As many as 11 people were killed there, according to the AP. The second shooting was reported at a bar called Le Carillon nearby. The concert hall where hostages were held is a little over a half mile from the site of the first attack — and all were apparently planned to maximize human damage in areas that would be full of people on a Friday night.

Three explosions were also reported at a bar near the Stade de France soccer stadium just north of the city, where France was playing Germany. French President Francois Hollande is said to have been attending the game, but was evacuated from the stadium as a precaution after the reported explosion.

Hollande has declared a state of emergency and ordered France’s borders closed. President Obama called the violence an “outrageous attempt to terrorize innocent civilians” in a statement Friday night, and said the U.S. would stand with its French allies.

No group has claimed responsibility, but ISIS adherents are celebrating the attacks on social media. French media reports that Kalashnikov rifles were used in the restaurant attack, the same type of rifle employed by militants in the attacks on Charlie Hebdo in January of this year. That attack at the French satirical magazine left 12 dead.