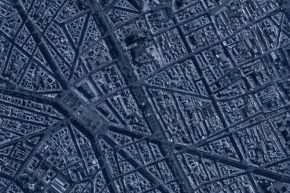 Map of Paris Terror Attacks, “Act Of War” By ISIS
By Allee Manning

Map of Paris Terror Attacks, “Act Of War” By ISIS

Attacks in six locations across Paris, explosions outside the city's biggest stadium

Sadistic terror attacks erupted at several locations across Paris on Friday night, prompting France President François Hollande to call the explosions of violence an “act of war” by ISIS. “It is an act of war that was committed by a terrorist army, a jihadist army, Daesh, against France,” Hollande said after ISIS both celebrated and took responsibility for the violence. “It is an act of war that was prepared, organized and planned from abroad, with complicity from the inside, which the investigation will help establish.”

The first attack was a shooting outside the Le Petit Cambodge restaurant about 4 p.m. ET, after which gunfire was reported at two other locations in the 11th arrondissement area. More than 100 people were killed during a massacre at a heavy metal concert in the Bataclan concert hall. On-the-scene reports suggested that around 50 were released alive, but not before scores of others were executed by ISIS extremists.