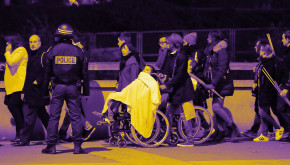 Paris Under Attack: Up To 39 Reported Dead, Scores Held Hostage
By James King

Paris Under Attack: Up To 39 Reported Dead, Scores Held Hostage

There are reports of three different attacks across the city

Explosions and deadly shootings ripped through Paris late Friday, killing up to 39 people and wounding scores more, according to multiple reports. As many as 100 people were also being held hostage at the city’s Bataclan concert hall, according to reports, in what appear to be a coordinated series of militant attacks.

President Obama called the violence an “outrageous attempt to terrorize innocent civilians” in a statement Friday night, and said the U.S. would stand with its French allies. The president also cautioned that information is still emerging.

The first shooting took place at a Cambodian restaurant in the city’s 10th Arrondissement. Police say up to 11 were killed there, according to the AP. The second was reported at a bar called Le Carillon nearby. The concert hall where hostages are reportedly being held is a little over a half mile from the site of the first attack.

Three explosions were also reported at a bar near the Stade de France soccer stadium just north of the city, where France was playing Germany. French President Francois Hollande is said to have been attending the game, but was evacuated from the stadium as a precaution after the reported explosion. Hollande has declared a state of emergency and ordered France’s borders closed.

No group has claimed responsibility, but ISIS adherents are celebrating the attacks on social media. French media reports that Kalashnikov rifles were used in the restaurant attack, the same type of rifle employed by militants in the attacks on French magazine Charlie Hebdo in January, in which 12 people were killed.

Posts purportedly describing the attacks are flooding social media. “I was right beside it, I ran at the gunfire, I want to know if they are there or if they’re still wandering about,” one tweet from a woman who said she was in the vicinity of the concert said.

Bodies littered in the streets of central #Paris like in a war zone. Police now say 20 dead but death toll rising. pic.twitter.com/Acn7yRud4n