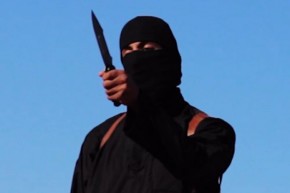 How “Jihadi John” Became The Face Of ISIS
By James King

How “Jihadi John” Became The Face Of ISIS

The Kuwaiti-born Brit, who was synonymous with the brutality ISIS meted to its victims, is said to have been killed in a U.S. military drone strike

To many, his was the masked face who challenged President Obama while holding a knife to an American throat. On Thursday, Mohammad Emwazi, dubbed “Jihadi John,” was said to have been killed in a drone strike in eastern Syria, traveling in a car with another man.

“We know for a fact that the weapon system hit its intended target, and that the people on the receiving end of that weapons system were in fact killed,” coalition spokesman Col. Steve Warren told reporters, adding that officials planned to confirm that those killed “were specifically who we thought they were.”

Emwazi, a Kuwaiti who grew up in London, gained notoriety after ISIS released videos that appeared to show him beheading hostages including American journalists James Foley and Steven Sotloff in 2014. In all, Emwazi is believed to have been involved in the murders of 28 people, including the mass-beheadings of 21 Syrian soldiers by ISIS fighters in November of 2014.