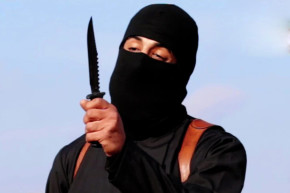 A U.S. military spokesman said he was “reasonably certain” ISIS militant “Jihadi John” was killed in a drone strike while traveling in a car in the Syrian city of Raqqa late Thursday.

Speaking to reporters from Baghdad, Col. Steve Warren said the drone sent a Hellfire missile at the car in which the militant, whose real name is Mohammad Emwazi, was traveling in, along with “his worst best friend,” likely a driver or an escort.

Emwazi had appeared in several brutal execution videos, and according to activists in Raqqa, was killed at 11:41 p.m. Thursday night local time.

The group, called Raqqa Is Being Slaughtered Silently, said in a Facebook post that Emwazi, was driving a car carrying ammunition near an Islamic court in Raqqa when he was hit.

“Emwazi, a British citizen, participated in the videos showing the murders of US journalists Steven Sotloff and James Foley, US aid worker Abdul-Rahman Kassig, British aid workers David Haines and Alan Henning, Japanese journalist Kenji Goto, and a number of other hostages,” the Pentagon has said.

The strike occurred just hours after Kurdish forces backed by U.S.-led coalition airstrikes launched an offensive to retake the strategic Iraqi town of Sinjar from the Islamic State early Thursday. U.S. forces are placed among Kurdish fighters in northern Iraq and are helping them develop targets in the fight, a U.S. military spokesman in Baghdad told Vocativ.

British Prime Minister David Cameron said the operation to kill Emwazi was a joint operation with the U.S., and that killing Emwazi was an act of self-defense and “the right thing to do.”

“His death does not bring Jim back,” they said in their statement ”If only so much effort had been given to finding and rescuing Jim and the other hostages who were subsequently murdered by ISIS, they might be alive today.”

“Finally a little bit of justice,” said Sotloff’s sister Lauren. “Not the way I would of wanted him to die. He should of had his head cut off also and been left to suffer. But at least he is dead,” she wrote in a post on Facebook. “Hoping my brother is in heaven knowing some justice was served. Unfortunately this still doesn’t change things. Wish they would have killed him while my brother was still alive. Its just too late.”