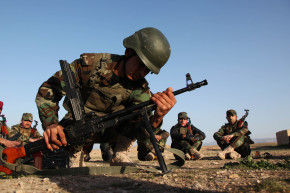 ISIS Under Siege: A Brief History Of The Fight For Sinjar
By Shane Dixon Kavanaugh

ISIS Under Siege: A Brief History Of The Fight For Sinjar

The northern Iraqi town is a strategic stronghold for ISIS, serving as a supply route for its fighters and weapons

Backed by U.S. forces, Kurdish fighters on Thursday began a major offensive in northern Iraq aimed at recapturing the town of Sinjar from the Islamic State, and seizing a strategic supply route controlled by the jihadist group. The area came under ISIS control more than a year ago when militants stormed Sinjar and surrounding towns and murdered, raped and enslaved thousands of Yazidis, a religious and ethnic minority from the region.

The bloody assault caused thousands to flee into a nearby mountain range where they were soon trapped and surrounded by ISIS fighters. Missions to rescue them marked the beginning of the U.S.-led air war against the Islamic State in August 2014. Since then, Kurdish and ISIS forces have repeatedly clashed for control of the area, which contains a road that connects Syria to Mosul, Iraq’s second-largest city and an ISIS stronghold.