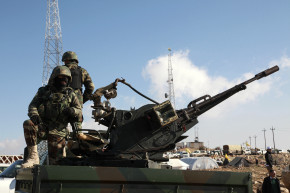 U.S. forces are on the ground in northern Iraq guiding the ongoing battle to take back a strategic town from ISIS

U.S. forces are placed among Kurdish fighters in the northern Iraqi region where fighters have moved to battle ISIS and retake the town of Sinjar, a U.S. military spokesman in Baghdad has told Vocativ.

The U.S. forces are “back from the (front) line, with a few atop the mountain helping Peshmerga fighters develop targets,” Col. Steve Warren said Thursday. He declined to say how far from the battle that was. Mount Sinjar was the scene more than a year ago of frantic missions to rescue trapped Yazidis from ISIS, which had overrun the area and captured and killed thousands of people belonging to the ethnic minority, and enslaved many of the women and children. Since then the Kurds have reclaimed the area, and are now focused on Sinjar itself.

Kurdish forces together with thousands of Yazidi fighters reportedly captured a strategic highway that would cut off supply lines for ISIS. “Sinjar is important because it sits astride Highway 47, which is a major enemy supply route and the primary line of communication between Raqqa (in Syria) and Mosul (in Iraq),” Warren said. “Severing that supply route will impact ISIL’s ability to move men and material between those two hubs. The coalition is providing substantial air power to support this operation,” he said, using another name for ISIS, which is also called the Islamic State.

The U.S.-led coalition launched 20 airstrikes over eight hours on the area, but Kurdish Peshmerga fighters have not yet been able to enter the town yet, the U.S. military confirmed. ISIS is reportedly barring the few civilians remaining from leaving the area.

The expectations of a Kurdish win are high. The U.S. military expects the Peshmerga fighters to control the city in less than four days, and another week to clear it of any remaining ISIS fighters and other threats, possibly including explosives.