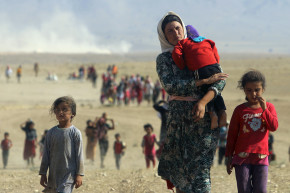 Kurdish activists claimed ISIS barred civilians from leaving Sinjar so they could be used as human shields while Kurdish forces launched an offensive to retake the strategic Iraqi town. The activists also claimed in a Facebook post that the terror group deployed “execution squads” to arrest people fleeing fighting around the town, which the Islamic State captured over a year ago.

The activists posted images they say showed ISIS members blocking civilians from driving out of Sinjar on Wednesday night. The claims were not independently verified, but this wouldn’t be the first time ISIS has allegedly prevented civilians from leaving a city under its control. Reports in July said the terror group had stopped civilians from leaving Fallujah for three months so that they could be used to prevent or limit attacks on the city.

The Kurds began their assault on Sinjar on Thursday at sunrise local time with support from U.S.-led coalition airstrikes. The U.S. expects it will be a tough fight and that ISIS will defend its position fiercely.

A U.S. military official said it could take two to four days for the Kurds to secure the strategic town, which is critical in the fight against ISIS. It serves as a key link connecting the terror group between Syria and Iraq, spanning a highway that is a supply route and the main line of communication between ISIS-controlled Raqqa and Mosul.

By late Thursday afternoon, a U.S. military official said Peshmerga Kurdish fighters had not yet been able to enter the town and that not many civilians were left inside it.

The Kurdish Region Security Council, of Kurdish Iraq, said the ground offensive involved up to 7,500 Kurdish fighters, and that as many as 600 members of ISIS were believed to be inside Sinjar as of early Thursday. The council uploaded an image Thursday morning showing U.S.-led airstrikes west of the town.

Photo of a @CJTFOIR airstrike in West front of Sinjar. ISIL continues to use VBIEDs against our forces. #FreeSinjarpic.twitter.com/AQQw9kllsp

By early Thursday morning, a pro-Kurdish Facebook page reported that ISIS members were fleeing Sinjar, and uploaded what it claimed was a new image showing an ISIS member captured by a Kurdish fighter in Sinjar.