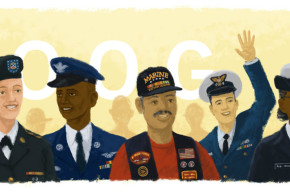 White nationalists get angry about a lot of Google Doodles

In keeping with their tradition of showing outrage over Google Doodles representing all races, the white nationalist website Stormfront.org objected to the multicultural Veterans’ Day design.

The Doodle features illustrations of seven veterans of varying races and branches of the U.S. military. While at least some of the pictured veterans appear to be white, a member of the white nationalist website who claimed to be a veteran, insisted the Doodle did not include a single white person and demanded boycotting Google “for their blatant support [of] multiculturalism, diversity, and white genocide.”

The 2015 Veterans Day Google Doodle is visible to users in the U.S.

Another user pointed out that despite the skin colors depicted, most veterans are actually white. “Whites have overwhelmingly staffed, run, fought and died in America’s wars but Google would rather remind us how all that was for nothing because the west is now a n***** worshipping multikult (sic) anti-white cesspit,” the post read.

“You can’t expect much else from Joogle,” another user commented, a smear against Google’s co-founder, Sergey Brin, who is Jewish.

One user conceded that one of the veterans in the Doodle—the second person from the left dressed in military uniform—is Caucasian, but insisted: “As the whitest one there, she has a black Air Force colonel eye-****ing her.” Another commenter claimed to actually like this year’s Google Doodle, but only because “the white man has no business fighting these wars. He needs to start fighting for his kin.”

This is not the first time white supremacists have taken offense to Veterans Day Google Doodles. Last year, Infostormer.com became similarly enraged at a Doodle which featured a white veteran saluting, surrounded by four veterans of different races. The website took particular ire with Brin, writing: “It doesn’t matter that the military is comprised mostly of white men, the Jews over at Google didn’t seem to care.”

It’s not just Veterans’ Day Google Doodles that rile up white nationalists. A Christmas-themed Doodle that appeared in Australia on December 23, 2014 drew the ire of Stormfront. It depicted a woman in a sleigh next to white, Asian and black children. “Notice the slanted eyes and the darker skin of the second child depicted in comparison with the third. Australia is a white Christian nation, and this Google Doodle is an insult to all Australians,” a user wrote.