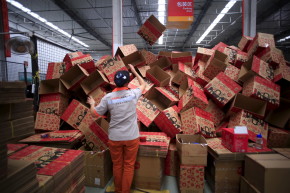 The world’s biggest online shopping day just got even bigger. China’s Singles Day (every year on November 11), hit a gobsmacking new sales peak, with Tmall, a marketplace owned by Alibaba, raking in $14.32 billion in one day.

Singles Day is a day for unattached people in China to celebrate their single status by spending cash online and they were out in full force this year – it took just 78 seconds for Alibaba to break the 1 billion yuan ($157 million) mark. Eleven minutes and ten seconds later, sales had already topped 10 billion Yuan ($1.57 billion). Just before midday, Alibaba announced that its sales figures had passed 57.1 billion Yuan ($8.96 billion), breaking the 2014 sales record in a matter of 12 hours—and the money kept rolling in. By the end of Singles day, Alibaba had done more than 91 billion yuan in transactions, or $14.32 billion. That’s slightly more than the GDP of Jamaica.

Bear in mind, also, that represents sales on one single platform (albeit China’s biggest) on one single day. Compare that, then, to America’s biggest online sales day, Cyber Monday: It raked in just over $2billion in 2014, a new record, and yet now, seemingly inadequate. THANKS, Obama.