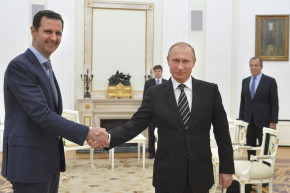 The Syrian regime, backed by the Russian Air Force, marks a critical victory over its battle with the Islamic State

The Russian Air Force backed Syrian government forces on the ground to finally overcome a two-year siege by ISIS fighters on a major airport in the northern Syrian city of Aleppo Tuesday, a significant victory in the regime’s battle to reclaim territory from the militant group.

Syrian state television confirmed the reports of the victory at Kweris airbase near Aleppo, claiming the operation was led by Syrian “Tiger Forces.” The operation’s success will not only help restore the sagging morale of Syrian government forces. It may also boost the Syrian regime’s ability to cut supply lines used by ISIS to connect between Raqqa in the east and Aleppo in the north, and passage for its fighters and equipment. It’s also the first successful offensive conducted by the Syrian army with the assistance of the Russian military.

Already online pro-government accounts have praised the victory, posting images reportedly of the unit’s commander, Col. Suheil al-Hassan after his forces managed to get into the base.

Translation: You promised and kept your promise

ISIS supporters reacted bitterly to the news, saying that ISIS fighters didn’t have the support of many nations with air power.

Translation: “The Shiites (President Bashar al-Assad is an Allawite, which is related to Shiite Islam) are celebrating and dancing as heroes who fight the lions of the Caliphate without the help of 60 countries. #Kweres_airbase

Translation: Oh Allawites, in the coming days you will see what is the army of the Caliphate. #kweres

Russian President Vladimir Putin had said his country’s entry into the Syrian conflict was largely to help President Bashar al-Assad combat terrorism and prevent the collapse of the Syrian government. But at the outset, his air force had targeted rebel-held strongholds, and ISIS was far from any of those areas that were bombed. This offensive represents a shift in Putin’s bombing campaign in Syria. Up until days ago, Russian airstrikes had killed more civilians than ISIS fighters.