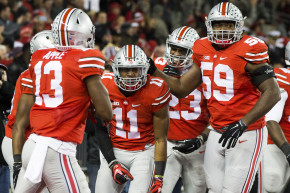 Seemingly loaded at QB, Buckeyes look ordinary when starter sent to the bench

Ever since Braxton Miller went down with a right shoulder injury in the 2013 Orange Bowl, the biggest question on campus at Ohio State has been: Who’s gonna start at quarterback? While Miller sat out the 2014 season, redshirt freshman J.T. Barrett took over and put together a Heisman-worthy season until breaking an ankle against hated Michigan.

Enter redshirt sophomore Cardale Jones, who destroyed Wisconsin 59-0 in the BIG Championship game, stunned No. 1 Alabama 42-35 in the Sugar Bowl, then rose to the mountain top by starring in the Buckeyes 42-20 dismantling of Oregon in the first College Football Playoff championship.

But that was a year ago, forever in college football time. Now Braxton, a fifth-year senior is back, but as a receiver. Jones started OSU’s first seven games, but had turnover issues and was replaced by Barrett, who was looking like his old self until Halloween, when he was busted for drunk driving, suspended for last Saturday’s Minnesota game and stripped of his scholarship for next year’s summer semester.

So back to the beginning: What was everyone in Columbus talking about last week? Vocativ used its deep web technology to collect geo-tagged social media posts from the OSU campus to identify which quarterback was being talked about by students. Barrett, the underage, police-checkpoint-evading, aid-money-losing newsmaker, was mentioned three times more than Miller. Miller returning to QB as a backup to Jones was an intriguing subplot, yet Barrett was still mentioned more than twice as much as Jones. However, despite being mentioned less than Barrett, Jones seems to be popular amongst students on campus, often posing for selfies.

In the end, all the intrigue leading up to the game was more interesting than anything that happened on the field. The No. 1-ranked Buckeyes ground out a pedestrian 28-14 win over the Gophers, riding tailback Ezekiel Elliott’s 14th-straight 100-yard game. Jones was a meh 12-for-22 for 187 yards, lost a fumble and was sacked four times. Miller took five snaps, running every time for just 11 yards.

“Offensively, we were sloppy and not executing at a high level,” said coach Urban Meyer. “It’s not what we expect. We expect to play better.”

We expect Barrett to be back under center this week, when OSU is sure to go to 10-0 against lowly Illinois, and the quarterback conversation to continue.