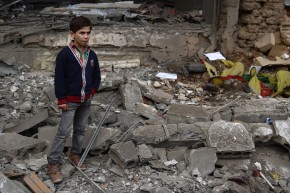 Weapons fired by Russian war planes through the end of October left at least 185 civilians dead, including 46 women and 48 children, which is 30 percent more than the 131 ISIS fighters killed by these strikes, according to the Syrian Observatory For Human Rights, which is based in the United Kingdom. During this time, the group said, Russian airstrikes also resulted in the death of 279 Syrian rebels.

The numbers lend new support to claims that Russia’s bombing campaign has not truly been focused entirely on ISIS, but has primarily targeted forces fighting its ally Assad. The Kremlin has repeatedly denied that since entering the conflict on Sept. 30, and it has also boasted that it has pursued extremists in Syria far more aggressively than drones and fighter jets flown by United States and its allied forces.

Data compiled by the Observatory, however, shows that U.S.-led airstrikes, which began 13 months ago in Syria, have killed ISIS fighters at a far higher rate than Russia while also harming civilians less. On average, bombs and missiles fired by U.S.-led forces killed 286 members of ISIS a month, more than twice as many as Moscow’s did. Meanwhile, the number of civilians killed by U.S. coalition airstrikes has averaged about 17 a month, less than a tenth of Russia’s 185 in October.

Several different monitoring groups, including Airwars and the Syrian Network For Human Rights, have also tracked some of those killed in airstrikes during the country’s escalating civil war. Airwars, which is also based in the U.K., provides data on U.S.-led airstrikes in Syria, but has yet to publish figures on Russia’s. The Syrian Network focuses on strikes carried out by Russia and the Assad regime.

The Observatory gathers its figures through activists on the ground who confirm identities of the dead with relatives and officials. Chris Woods, the director of Airwars, said the Observatory appears to provide conservative estimates for those killed.

The Assad regime itself is still the force claiming more innocent lives in Syria than any other. A recent study published by the Syrian Network found that Assad’s military was responsible for the more than three-quarters of the 10,354 civilians killed through July of this year.