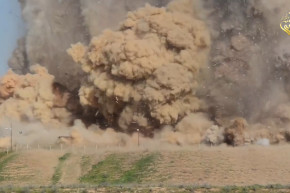 An ISIS news agency report suggests they're doubling down on martyrdom

ISIS is doubling down on suicide attacks, according to self-reported figures released by an affiliated news agency this week. The ISIS-linked “Amaq” news agency published infographics which it claims details statistics on suicide attacks conducted by the group in Syria, Iraq and Egypt during the months of September and October 2015. According to the statistics, which cannot be independently verified, the number of suicide attacks conducted by the various ISIS provinces more than doubled from September to October 2015, from 29 to 65 respectively.

One of the most striking figures provided among the terror group’s statistics is that 21 out of the 65 suicide operations by ISIS in October were conducted in “Salah e-Din province” in central Iraq. This number may add some credibility to the statistics, as it has already been reported that ISIS deployed a number of suicide bombers in a bid to defend its control of the strategic Baiji oil refinery from the Iraqi army and Shiite militias who were backed by the U.S. Air Forces.

More An Analysis Of ISIS Quarterly Reports: Kill And Conquer

At one point, ISIS released detailed month-by-month figures breaking down their incredible tally of violence, but have since stopped issuing such data. Transparency and terrorism, apparently, are not 100% compatible.