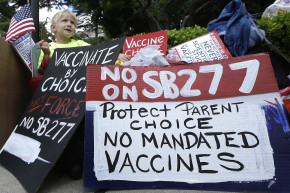 Anti-Vaccine Websites Are Tricking Parents With These “Facts”
By Joshua A. Krisch

Anti-Vaccine Websites Are Tricking Parents With These “Facts”

Two thirds of anti-vaccine websites claim they're using scientific evidence to back up their claims, study shows

Anti-vaccine websites use a clever mixture of heart-wrenching stories, pseudoscience and outright deceit to convince parents not to vaccinate their children, according to a new study.

Researchers unearthed 500 anti-vaccination websites through Google, Bing, Yahoo and (because, why the heck not?) Ask Jeeves, to understand the tactics vaccine skeptics employ to scare parents into opting out of life-saving shots. They then sorted the false claims found on each website into categories. Here’s a summary of the misinformation and underhanded tactics that anti-vaxxers resort to online:

One of the recurring themes in anti-vaccine propaganda is an appeal to authority or—worse—science. Roughly 60 percent of the anti-vaccination websites reference out-dated or patently false “scientific studies”, scientists say, and more than half invoke so-called “scientific authorities”.

One immunologist often mentioned on these blogs is H. Hugh Fudenberg, an early proponent of the link between MMR vaccines and autism—a theory so thoroughly disproven that not only scientists, but also courts all the way up to the Federal Circuit now unanimously agree that there is no connection whatsoever between autism and routine vaccinations. Incidentally, Hugh lost his license to practice medicine in 1995, after he admitted to the South Carolina medical board that he had illegally obtained and abused prescription drugs.

Another popular theme on these anti-vaccine websites is an appeal to ideology or lifestyle—the notion that those who value individuality and freedom are opposed to vaccines, and that anyone invested in Eastern medicine, organic food and healthy eating must fight the oppressive vaccine lobby. Many of these claims go hand-in-hand with others that sow contempt and mistrust of the government and the scientific establishment. And that’s especially problematic, because virtually every solid study proving that vaccines are safe is either funded by a major governmental body, or recognized by a major scientific institution like the American Medical Association, and the American Association for the Advancement Of Science.

It’s not all bad news, however. Public health officials could potentially use this report to devise more palatable strategies for convincing anti-vax parents to sign their kids up for life-saving vaccinations, the authors say. The data suggests anti-vaccine parents trust liberal, non-government organizations more than than the FDA or the CDC, and that those same parents tend to be interested in healthy eating, homeopathy, breast feeding and spirituality.

So while vaccine skeptics are likely to reject the CDC’s most recent recommendations, they might listen if “friendlier” organizations (the Organic Trade Association or the Family Breastfeeding Association, for instance) began spreading pro-vaccine messages. At the very least, the data could help physicians find some common ground with anti-vaxxers.

“The biggest global takeaway is that we need to communicate to the vaccine-hesitant parent in a way that resonates with them and is sensitive to their concerns,” said Meghan Moran associate professor at Johns Hopkins University and coauthor on the study, in a prepared statement. “In our review, we saw communication for things we consider healthy, such as breastfeeding, eating organic…I think we can leverage these good things and reframe our communication in a way that makes sense to those parents resisting vaccines for their children.”