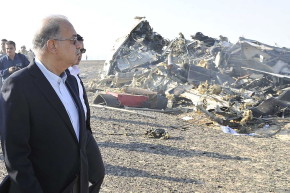 Russians reacting to the crash of a Russian passenger jet appear more likely to blame it on a terrorist attack, something Egyptians are rejecting entirely. Egyptians are taking the opposite view to the Russians, claiming the crash was due to technical or mechanical failures. Until an official investigation is concluded, there is no shortage of theories.

Egyptians are furious that an ISIS affiliate operating out of the Sinai Province is claiming it is behind the crash that killed all 224 people onboard. “The aviation experts stressed the impossibility of a terrorist act in altitude of 30,000 feet,” one Egyptian posted on Twitter after the crash. “Die in your rage, ISIS liars.” People online have been responding to the possibility of a missile launched from the ground that might have brought the plane down. While ISIS is taking credit for the incident, it has yet to provide any details of how such an operation might have taken place. The group normally includes details when announcing attacks and operations.

Egyptian officials, perhaps in an attempt to discredit an ISIS success within its borders, later claimed the plane crash was the result of technical failures. On Monday, the airline claimed its investigation so far has revealed that the plane broke into pieces at a high altitude, and was caused by “an external influence.”

Some Egyptians took to social media to blame Islamist organization the Muslim Brotherhood for downing the plane. “The criminal brotherhood wanted also to hurt the Egyptian tourism and take revenge against Russia and Egypt at the same time,” Egyptian political activist Sameh Abou Arayes wrote on Facebook, although his claim was largely mocked by commenters on his post.

For its part, the Russian airline, also known as Metrojet, rejected the notion that the condition of the plane or actions of its pilots were to blame for the deadly crash. “We exclude technical problems and reject human error,” airline official Alexander Smirnov said at a Moscow press conference.

The Sinai Peninsula has been a hotbed for terrorist activities over the last decade. A successful terrorist attack like downing an airplane over Egyptian airspace could be seen as a blow to President Abdel Fattah el-Sisi’s efforts to curb terrorism—”the plane crashed because of technical failure, and al-Jazeera (one of Sisi’s enemies) are selling the news to put shame on the country,” one Egyptian, Ayman John, posted on Twitter after the plane went down.

The results of an online poll by a Russian radio show, Talking Moscow, found that 57 percent of those polled believe the crash is the result of a terrorist attack, while 43 percent believe it to be a mechanical failure. “The terror attack version is looking more authentic every day, all the other versions are starting to sound like a fantasy,” one Russian, Egor Holmogorov, posted on Twitter.

Several airlines in the Middle East and Europe have said they will avoid flying over the area where the plane went down until the threat of a terrorist attack could be determined. Emirates, Air Arabia, Lufthansa and Air France-KLM reportedly are among the airlines now avoiding the area.

Russian and Egyptian officials said it is still too early in the investigation to definitively say what caused it. “It is completely premature to speak about the reasons of this, as there are not grounds,” Alexander Neradko, the chief of Rosaviatsia, the Russian Federal Air Transport Agency, told a Russian news outlet. “And I’d like to call on the aviation community to refrain from any premature conclusions.”