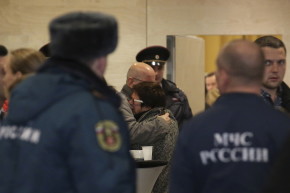 The ISIS affiliate in the Sinai province insists it is responsible for crashing the airbus, not technical difficulties as officials are claiming

An ISIS affiliate operating in the Sinai Province claimed Saturday it was behind the crash that brought down a Russian passenger jet, killing all 224 passengers and crew on board.

Egyptian officials however, are insisting it was a mechanical failure, and not any action by the terror group that has established a presence in Egypt. In an official statement posted online, ISIS said the attack was in retaliation for Russian fighter jets bombing targets in Syria as Moscow supports the regime of President Bashar al-Assad.

“The soldiers of the caliphate were able to shoot down the Russian plane above Sinai province, that carried more than 220 Crusaders, all of whom were killed,” the statement read. “Oh Russians and their allies, you should know that you will not be safe in Muslim lands. That killing dozens every day with your warplanes will bring disaster upon you. You will be killed as you kill.”

The statement, however, doesn’t state how the Airbus A321 was brought down and what weapons might have been used to do so. Typically, ISIS statements mention how they were able to carry out operations.

More These Are The Groups Fueling Chaos In Egypt

The airliner, operated by Russian airline Kogalymavia under the brand name Metrojet, was flying from the Sinai Red Sea resort of Sharm el-Sheikh to St Petersburg in Russia when it went down in a desolate mountainous area of central Sinai soon after daybreak Saturday, the aviation ministry said.

Reuters reported that initial examinations showed that a technical fault caused the crash. The plane landed in a “vertical fashion” the news wire quoted a source in north Sinai as saying.

The Russian Embassy in Cairo said it had been told by Egyptian officials the pilot had been trying to make an emergency landing.

Online ISIS supporters echoed the statement that the attack was in response to Russia’s entry into the civil war in Syria.

Translation: Russia bombed the Muslims in Duma and Aleppo (in Syria) and killed hundreds, and the revenge came from Sinai Province.

Russian President Vladimir Putin said he was supporting Assad against terror groups such as ISIS, however the large majority of the airstrikes conducted by the Russian air force in Syria have been against rebel strongholds that are fighting to unseat the Syrian regime. ISIS fighters were often far from those targets.

Translation: Yesterday Putin killed 200 Muslims in a massacre, and today a Russian plane crashed and 224 were killed. Thanks to God who takes revenge, this is our (Islamic) state.